MOSCOW, February 26. Over the year the number of Russians who have incomes below the subsistence minimum, reached 19 million people.

This was announced by the Minister of labour and social security of Russia Maxim Topilin in an interview with NTV television. 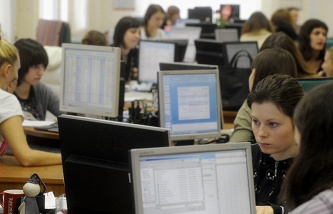 The Ministry of labor: real wages in Russia will return to the level of 2014 in 2018

“For the year this figure has increased in absolute terms 3 million, i.e. 16, 19 million people who are below the poverty subsistence level. 60% or even 70% of these poor are families with children,” he said.

Topilin also said that the overall unemployment in Russia in 2016 will amount to 6.2-6.3 percent. “That is, in my opinion, acceptable. That is, it is not critical”, – he said.

Subsistence minimum – the cost assessment of the consumer basket (minimum basket of goods and services essential to the viability and preservation of human health), as well as mandatory payments and fees (taxes, utilities, etc.). Its value is calculated as in Russia as a whole and on each region of the country.

The size of this indicator in General in Russia is established by the decree of the government on a quarterly basis according to main socio-demographic groups: for the able-bodied population, pensioners, children and, separately, in per capita terms. Thus, the subsistence minimum per capita in the third quarter of 2015 is set at 9673 ruble.

A decrease in the level of salaries

The reduction in real wages of Russians in 2016 will be about 3-4%. Topilin believes.

“I believe that this year will not be as dramatic fall in real wages. They will maybe slightly decrease. Real wages. But it will be within 3-4%”, – he said.

According to Rosstat, in January 2016, the average gross monthly wages rose on average by 3.1% and amounted to $ 32,122 thousand rubles, and in relation to December last year decreased by 26%.