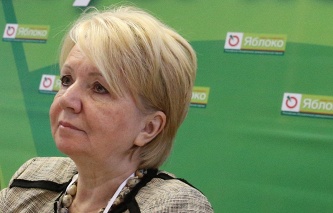 “Thus, the incumbent Chairman of the party “Yabloko” Emilia Slabunov will not able to run in the next elections to the state Duma from one-mandatory election district №10 of the Republic of Karelia in 2016″, – underlined in the message.

In addition, an amendment was adopted according to which “the Federal political Committee of the party shall be authorized to agree on the lists of party on elections in Moscow and St. Petersburg”.

On 28 February, the second day of the Congress will address key issues on the agenda, the report said. To the delegates with a keynote speech will address the Chairman of the Federal political Committee of the party Grigory Yavlinsky. Congress will consider the nomination of his candidacy for the post of President of the Russian Federation.