The truce officially came into force on 27 February at midnight. “Combat operations have ceased in 34 settlements”, — said at a briefing on Saturday, the head of the Centre for reconciliation of the warring parties, the General-Lieutenant Sergey Kuralenko. The fighting, including the flights of Russian aircraft over the entire territory of the country, according to Korolenko, were cancelled in the cities in the provinces of HOMS, Hama, Damascus.

The truce will not apply to terrorist groups fighting in Syria, at Saturday’s briefing in Moscow recalled the provisions of the ceasefire, the representative of the General staff of the Armed forces Sergey rudskoy. “The struggle against armed gangs, a UN recognized terrorist, will be continued”, — said the representative of the military Department.

The Deputy head of the delegation of the Syrian opposition at talks in Geneva George Sabra said that in the first hours there were violations by the Syrian army in the provinces of Dara’a and Damascus. This information was confirmed by the leaders of the opposition on the spot. As stated by Reuters, the leader of the rebel group “Fursan al-Haq” (part of the “free Syrian army”) fares Bails, government troops continue to inflict artillery strikes on the territory of the opposition in the provinces of Hama and Damascus.

By Sunday evening there were new reports of violations. Eyewitnesses photographed the bombing of six settlements in the North of Aleppo. According to the head of the Syrian Observatory for human rights, Rami Abdurrahman, to establish which party owns the aircraft, impossible. The organization is aware that some attacked the city, including Darat Azza, are under the control of the group “Front EN-Nusra” (banned in Russia) and other terrorist groups. “We’re not sure, is it a violation of peace agreements, since it is not clear whether the attacked city in the agreement,” he said.

According to Russian sources, Aleppo currently control the terrorist group.

The last few weeks for Aleppo, fierce fighting between the army of Syrian President Bashar al-Assad and the opposition with participation of units of the terrorist organization “al-Nusra Front”. Government forces supported by Russian aviation and troops of the Lebanese “Hezbollah” managed to cut off the city from communication with the territories of the rebels in the North of the country. Prior to the conclusion of agreements of the Republican army moved toward the Turkish border. Hezbollah at the same time trying to close the corridor that connects the Eastern areas of Aleppo with the rest of the territories under the control of “Syrian free army”. 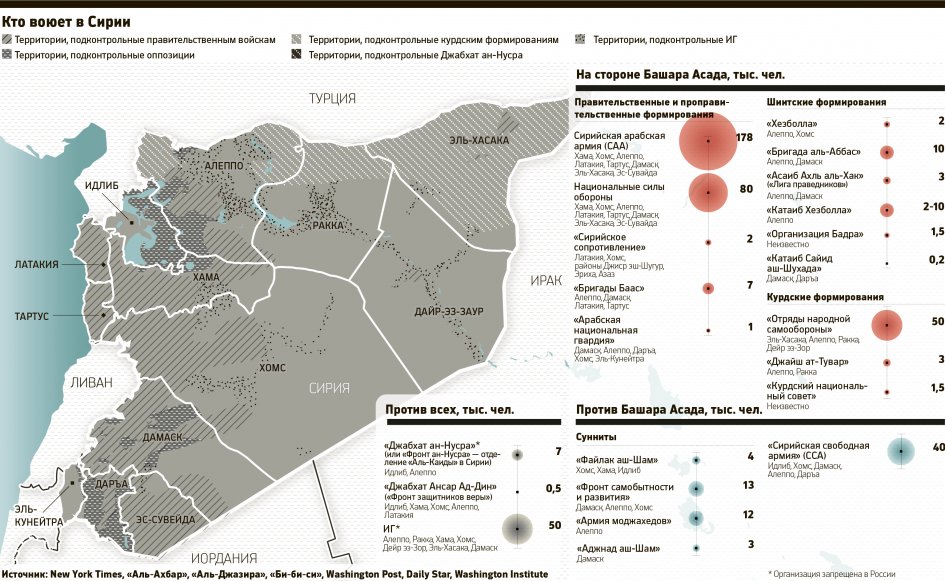 All, according to Russian sources, per day identified nine violations of the cessation of hostilities, said Kurylenko “Interfax” on Sunday night. Also, according to him, there has been a breach of the border of Syria “from Turkey by a group of militants numbering up to 100 people and the seizure of this group, in collaboration with other bands North of the city At tell-El Abyad”. The actions of the gangs, he said, were supported by artillery fire from Turkish territory.

According to Korolenko, the Russian side has already appealed to in Amman, the American center for reconciliation for an explanation. The bombing of the territory controlled by the Kurds, was confirmed by the Syrian Observatory for human rights.

In turn, the foreign Minister of Saudi Arabia Adel al-Jubayr at a Sunday press conference in Riyadh has accused Russian planes and Syria in violation of the ceasefire regime.

The truce is a very important step in the Syrian settlement, but the agreement that led to his imprisonment, left a number of unresolved issues, draws attention to Vasily Kuznetsov, head of the Centre for Arab and Islamic studies of the Institute of Oriental studies of the Russian Academy of Sciences. An exception to the terms of the armistice of terrorist organizations is absolutely logical, but it creates opportunities for provocations from different parties, so it is necessary that all participants expressed responsibility and calm. However, given the information war waged by the parties to the conflict, accusations of provocation, I’m sure Kuznetsov.

The path to peace

How the ceasefire depends on the continuation of political negotiations. Before the truce the UN security Council unanimously adopted a resolution which established it. They reiterated the principles laid down in the joint statement Russia and the United States. “For sure we will see many attempts aiming to undermine our efforts,” — said after the vote, the special envoy of the UN Secretary General for Syria Stephan de Mistura (quoted by “Interfax”). However, according to the diplomat, this truce is the best that could be hoped for all five years of the conflict.

Russia and the U.S. have repeatedly said that the ceasefire should facilitate the political process. De Mistura said on Friday that in case of observance of the ceasefire and ensure the delivery of humanitarian aid March 7, he intends to resume the inter-Syrian negotiations.

Such negotiations involving representatives of the Syrian government and the opposition have been scheduled for January in Geneva. The delegation came, but formally the work has not begun, and on 3 February de Mistura them suspended. To resume their planned 25 February, however the start was delayed.

On Thursday the representative of the higher Committee on negotiations Riyadh naasan yeah, told “Interfax” about the readiness of the Syrian opposition to the negotiating table. “The resumption of negotiations would be possible only if commitments are clearly run as a regime and foreign powers that support it”, — said the permanent representative of France to the UN Francois Delattre.

De Mistura is ready to negotiate, but they required the willingness of the parties to agree, and it will only appear if “on earth” will come and de-escalation of the conflict parties will have the understanding that they will not be able to radically change the situation in their favor, says Vasily Kuznetsov.