MOSCOW, February 29. The former President of the USSR Mikhail Gorbachev believes its key achievements of freedom and openness. 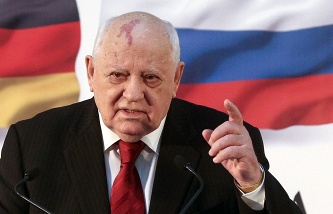 “The most important thing – freedom and openness”, – he said on Monday, answering journalists ‘ questions.

Gorbachev assured that remains faithful to the ideas of perestroika. “I remain loyal to the ideas and the choice that I did,” he said. According to former Soviet leader, he stand at the head of the state, we conducted the reform “in an evolutionary way and without any shocks”.

He also urged to overcome the effects of Stalinism in the society. “I just say – Stalinism must be overcome. Millions left because of Stalin,” Gorbachev said.

Mikhail Gorbachev also called for the holding of fair elections. “We need to allow – as we in 1989 provided the opportunity for the first time in the history of our country – to publicly vote to make a choice,” he told reporters, answering a question about what his biggest concern in contemporary politics.

According to him, fair elections serve the cleansing power. “We need to give people the opportunity to choose. And everyone who is arrogant… who came to guide to cash, cheat and so on, they are, if there are fair elections, they will not be there,” said Gorbachev.

The former President of the USSR took Sunday part in the presentation of the book “Gorbachev in life” prepared “Gorbachev-Fund”. The publication is a compilation of quotations, excerpts from memoirs, interviews, documents, letters, articles Gorbachev himself as well as his advisors and assistants, cultural workers, journalists, entrepreneurs, hierarchs of the Russian Orthodox Church. More than seven hundred pages of the book cover all the stages of life of the former President, who turns 85 on March 2, years.