MOSCOW, February 29. The Congress “Right cause”, which, as expected, the party’s Chairman is elected, the business Ombudsman Boris Titov, began work in Moscow.

“Time issued 82 certificates of the delegates present,” announced the acting Chairman of the party Vyacheslav Maratkanov, opening the Congress. 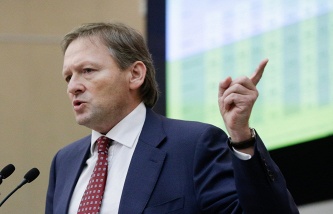 He proposed to elect the person presiding at the Congress, Titov, and was supported by the delegates.

The Ombudsman who were in the leadership of Right cause in 2008-2011, stated that he was glad many years later to lead the Congress party.

“I believe that today our party has a real opportunity for a new breath, a new situation to become one of the leading parties in the country”, – said Titov.

Titov thanked Maratkanova for what was done in the party during the absence of the Ombudsman in her leadership. “Recent years – 2014-2015 – the party has begun to recover, to win the position, though she started to gain these positions not from scratch, but with a deep minus,” he said.

Titov expressed the hope that the arrival of his team in the game, and also representatives of the Party professionals of the state Duma Deputy Oksana Dmitrieva enhance it. According to Titov, the party becomes “politically strong, seasoned partners.”

This, he said, “gives a very serious chance, the confidence that we can create our faction in the state Duma”.

“We are probably one of the most professional teams that now exist in Russia”, – concluded the Ombudsman.

Maratkanov in turn said that he intends to remain in the party leadership, if it is supported by the Congress. “Our agreement (with Titov) completely voluntary, they are legitimate… We remain with the team, work hand in hand,” he said.

Titov also said that the party “Right cause” during the month will hold the second Congress, which finally decides whether to change the name, and approve the electoral programme.

“We go to the next Congress, we agreed that we will hold it until 1st of April, where we will outline the program, our decision on the name of the party,” he said.

After this, according to Titov, the party “in full” will enter into the election campaign.

He had stated previously that will lead the party on elections in the state Duma on 18 September under a new name. Meanwhile, as reported earlier, the current Chairman of the party Vyacheslav Maratkanov, many party members oppose the change of title for eight months before the election.