ALGERIA, on 29 February. Algerian President Abdelaziz Bouteflika has confirmed an interest in cooperation with Russia in the framework of the forum of gas exporting countries and in maintaining regular contact, is devoted to the analysis of the situation on the world oil markets, said Russian foreign Minister Sergei Lavrov after talks with Algerian President.

“Special attention was paid to the energy sector. Here already forged a strong relationship between a number of Russian companies and Algerian state Corporation “Sonatrach”. There is also great interest from other Russian economic operators to establish partnerships with Algerian counterparts”, – said Lavrov.

According to him, the President of Algeria “has also confirmed the interest of his government in close cooperation between our countries in the framework of the forum of gas exporting countries and in maintaining regular contact, is devoted to the analysis of the situation on the world oil markets”.

On the formation of the anti-terrorist front

Sergey Lavrov also said that the President of Algeria fully supported the line of Russia on the formation of a broad front in the fight against terrorism.

“We discussed the problems of the Middle East and North Africa. The President fully supported the line of Russia on the formation of a broad front to combat terrorism in accordance with the initiative, which the President (Vladimir – ed.) Putin put forward at the General Assembly in September last year. Supported by our action to promote the Syrian settlement within an international support group of Syria, which operates under the co-chairmanship of the Russian Federation and the USA”, – said Lavrov.

In his words, “our common position is that the decision support group of Syria, which were approved by the UN security Council, should be fully implemented without any preconditions and with the understanding that for effective suppression activities (banned in the Russian terrorist gangs – ed.) ISIS and “Jabhat EN-Nusra” and the like it is necessary to stop the flow of smuggled weapons and fighters to Syria and Iraq”.

On the restoration of the Libyan state

In addition, Sergei Lavrov said that Russia and Algeria agree on the need to restore the Libyan statehood by organizing a genuine national dialogue. 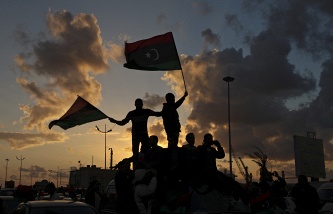 One country – two governments: the lives Libya after the “Arab spring”

“It was important for us to hear the President of Algeria and other of our interlocutors on the situation in Libya, where efforts are being made to overcome the deepest crisis of statehood that erupted after the illegal NATO campaign against the Libyan government in 2011. The consequences of this adventure are still being felt in the Sahel, where there is a tendency to destabilize, including in connection with the infiltration of militants and inflow of arms from Libya. These effects are observed in Europe, as one of the root causes of the crisis with illegal immigrants is precisely the collapse of the Libyan state,” Lavrov said.

In his words, “our common position is that you want to restore Libyan statehood by organizing a genuine national dialogue, in which participated all the forces: political, military, which now exist in Libya”.

“We also agree that, overcoming the manifestations of terrorism, extremism, violence, whether in Syria, Libya, Yemen, Iraq or any other country in the region must begin to comprehensively deal with the root cause of all these tragic events, they are trying to interfere in the internal Affairs of sovereign States, to impose prescriptions from outside, to promote the concept of regime change, as it used to be under the slogan of humanitarian intervention, it is now trying to do under the slogan of struggle against violent extremism”, – said the Russian Minister.

He also added that he agreed with the President of Algeria “to intensify the channels trustful dialogue on all aspects of the problems of the Middle East and North Africa and is convinced that, in General, the results of the visit will benefit the development of relations of strategic partnership between our countries”.