BAKHCHISARAI, March 1. /Corr. Alexey Konovalov/. The head of the Crimea Sergey Aksenov suggested the FSB to remove video surveillance cameras from the offices of officials of Bakhchisarai and “watch what they do”. So he responded to complaints from the public that the city does not conduct reception of citizens.

“Actually, you all videos to confiscate them. Viktor, I have a request, let’s see on the servers all were written that we need to withdraw and see what they were doing. There are also many interesting things can be,” said Aksenov at the meeting of the Council of Ministers of the Republic, addressing to the head of the FSB in the Crimea Viktor Palagin. 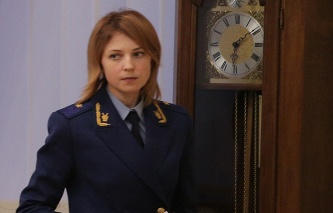 Poklonski: new criminal cases will be opened against the former leadership of Bakhchisarai

Earlier in the Internet appeared the video from the office of the head of administration of Bakhchisarai Vladimir Overlord. In the video, the leader and Chairman of the city Council Yury Gulyaev discuss ways of eliminating political rivals and develop the scheme of withdrawal of budget funds. 20 February verkhovod and Gulyaev has resigned at own will.

“Colleagues in Bakhchisarai in the office of himself arguing with vulgar language, something shared. Could not find opportunities to engage citizens. Colleagues are already looking for work elsewhere. An investigation is in their actions a crime”, – said Aksenov.

After the emergence of the scandalous video of the Crimean Prosecutor’s office conducted an audit, which found evidence of crimes. In particular, they investigated two criminal cases about forcible seizure of property of the company “UMAX” worth about 9.5 million rubles, as well as the theft of 3 million rubles allocated for the construction of water supply networks of the Empire. In addition, checks on the facts of impeding entrepreneurial activity, which are also relevant leaders of the city.

The Prosecutor’s office of Crimea has revealed the embezzlement of funds of the Crimean football Union, provided for the activities of the football club “Bakhchisarai”. The audit showed that the theft involved a former head of administration of Bakhchisarai Vladimir verkhovod.