UN March 1. /Corr. Oleg Zelenin/. Russia expects this year to see the progress in the launch of the judicial machinery for the investigation of crimes “Kosovo Liberation army” (KLA), who fought for secession of the province from Serbia. This was announced on Monday the permanent representative of the Russian Federation to the UN Vitaly Churkin at the meeting of the Security Council of the world organization devoted to the Kosovo settlement. 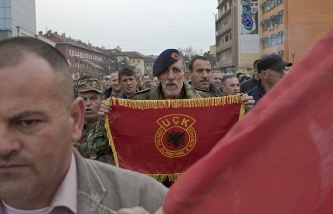 The diplomat called “a step forward” the consent of the government of the Netherlands to host the basic infrastructure of the Special court for war crimes in Kosovo. However, he expressed regret that the launch of the judicial machinery “is delayed with an eye on the political situation in Kosovo, where the idea causes a sharp rejection, especially from the opposition”. “We expect this year in this area will be progress. Crimes must be investigated and the criminals – whatever the position they now occupied – punished,” – said the permanent representative of the Russian Federation.

In January, the Dutch foreign Ministry said that the specialcourt will consider offences committed in 1999-2000, members of the KLA “against ethnic minorities and political opponents”. To locate the headquarters of the special court was originally planned to place outside Kosovo. It is anticipated that this will ensure the impartiality of this structure.

The basis for the work of the specialized court will serve as the report of the special Rapporteur of the parliamentary Assembly of the Council of Europe (PACE) dick Marty, presented in 2010. In it the Albanian authorities of Kosovo have been accused of drug trafficking and human organs, and of involvement in this activity is suspected the current leadership of the breakaway Republic, including its Vice example Hashim Thaci, on February 26, elected President.

April 24, 2014 Kosovo’s Parliament approved the establishment of the court under pressure from the international community, as was put before a choice – or the Tribunal will be established with the approval of the Kosovo, or the decision on its creation will be taken to the UN security Council. Thaci called the decision “a great injustice and an insult” to Kosovo.