Recently, the government introduced a recycling fee on self-propelled vehicles will hit the market of agricultural machinery. A number of suppliers to unilaterally notified the state company “Rosagroleasing” to suspend the shipment of the machinery, said last week the state Duma Deputy head of the company Natalya Zudina. She said that suppliers are informed about the upcoming price increases: the increase in the cost of tractor power 60 HP to 15.5% (from 798 thousand to 922 thousand rubles.), the tractor “Kirovets K-744Р3” power of 390 HP at 21.1% (from 7.5 million to 9.1 million), and combine “Rostselmash” may increase by 33%, to 10.1 million rubles. Delivery is suspended until the situation with recycling collection, said Zudina.

The leasing company, which buys equipment and transfers it in leasing to agricultural firms, has received from a number of companies, the new price offers for the agricultural machinery, the cost of which included recycling collection, says a source in the “Rosagroleasing”. Talking about the companies with whom Rosagroleasing expire on the expiration dates of price agreements. In particular, deals with the new prices came from the company “Agrotechmash”, “Kazakhselmash”, “Mordovagromash”, said the source . 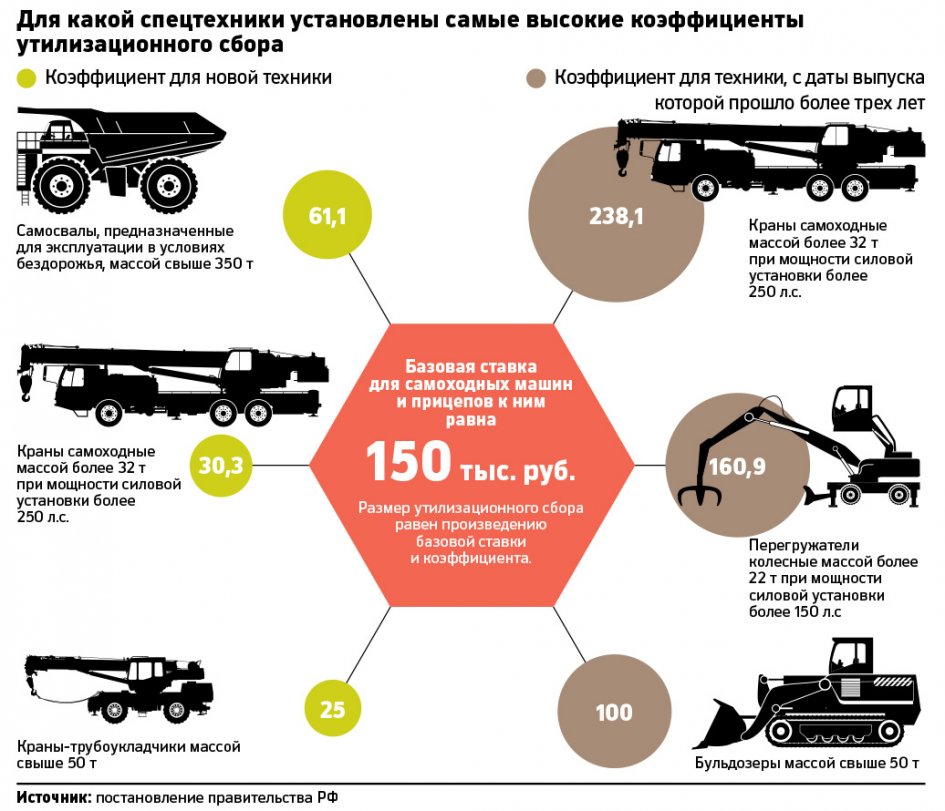 “The price agreement is [for approval] in the “Rosagroleasing”. We study this question, we are awaiting clarification [from the company], how it will happen. From the result of the explanation will depend on the outcome of negotiations”, — says Executive Director of the St. Petersburg company “Agrotechmash” (produces tractors under brand Terrion) Vitaly Kulagin. With “Kazakhselmash” and “Mordovagromash” could not be reached.

The car recycling fee in the millions

The amount of the utilization fee for self-propelled machines, which is a listed building, road and agricultural machinery, established by government decree of 6 February 2016; the decision came into effect immediately. Under the same taxation falls and imported into Russia, and domestically produced equipment, it follows from the law of the utilization fee, in effect from 1 January 2016. For imported machinery the fee shall be paid by the one who imported, made in Russia — the manufacturer, but the equipment purchased in Russia, can pay the buyer and, if the law or contrary to it recycling fee has not been paid.

Base rate of fee on agricultural, construction and road equipment the government has installed in the amount of 150 thousand rubles To determine the exact value of the baseline rate is multiplied by a certain factor — its value depends on the power output of the tractor or the combine, as well as the age of the machine. In particular, the coefficients for the calculation of car recycling fee on new wheeled tractors, depending on the capacity ranging from 0.4 to 9 basic rates (accordingly, the amount of the levy — from 60 thousand to 1.35 million RUB), for the same tractors older than three years — from 1.8 to 40 basic rates (270 thousand to 6 million rubles). Even higher coefficients and, consequently, the amount of the levy for grain and forage harvesters: for machines older than three years it can reach 7.9 million rubles.

Burden on Russian producers will not be significant in comparison with the former in the operation of imported equipment, says Kulagin from “Agrotehmash”.

Deputy Director on work with government bodies and external relations of the St. Petersburg tractor plant Andrey Efimov, on the contrary, notes that the introduction of utilization fee had a positive effect on the operation of the plant. “This will give us some price advantages compared to imported foreign models of vehicles, especially in former exploitation. For imported equipment, especially in the age of three years, the rates of utilization fees several times higher than for imported new equipment,” — says Efimov. He said that foreign second-hand machinery is no more than 25% of the market. He noted that while it is possible not to raise prices due to the “cost optimization”.

I agree with Efimov and Director of the Russian Association of agricultural machinery manufacturers “Rosagromash” korchevoy. He believes that the introduction of utilization collecting on the Russian market of agricultural machinery will be created equal conditions for domestic and foreign manufacturers. “This law will streamline and limit the uncontrolled import of used machinery. In the EU there are strict requirements for timing the operation of agricultural machinery and more stringent requirements on environmental emissions. It turns out that the old equipment that does not meet the requirements on emissions and end-of-century in Europe or America, not sent for recycling, and to us in Russia”, — lead his words branch portal “Agroinfo”. According to him, in recent years, the former in the operation of the equipment was supplied mainly from USA and Germany.

Along with agricultural, construction, road machinery and equipment for construction of forest under government regulations on recycling suddenly caught snowmobiles, quads, ATVs and off-road vehicles. The basic rate of duty and the coefficients for all these types of equipment are the same. This approach threatens the collapse of importers and sellers of ATVs and snowmobiles, wrote the St. Petersburg market participants the Commissioner for the protection of the rights of entrepreneurs in St. Petersburg Alexander Abrosimov (about the letter reported “Fontanka.ru”). In particular, the share of the fee in the price of snowmobile Sportsman ETX will be 19% (550 thousand rubles.), which is much more of the same fraction in the price of the tractor “Belarus-892.2” (8,5% of the cost, or 1.2 mln.), complained the authors of the message.