The contract for the construction of the century

The company “Neftegazstroy” won the tender for the construction of the gas pipeline “Power of Siberia” length of 60.7 km from compressor station “Amginsky” to COP “Nemirsky”. The cost of the contract is RUR 7.8 billion Winner offered for competition only at the price of 3.5 million rubles. below the maximum, follows from the data portal of public procurement. Competitors of “Neftegazstroy” for the tender were the company’s “Uzneftegazstroy”, “Nova”, “EVROKAR” and “Tatnefteprovodstroy”.

SPARC data indicate a relationship of “Neftegazstroy” with the developer company “Tashir” businessman Samvel Karapetyan. 50% of the “Neftegazstroy” controls Norik Petrosyan, 25% Armen Grigorian and Vaghinak Ghazaryan. Ghazaryan from 2005 until September of 2015 headed “IR Tashir”, the General Director of “Neftegazstroy” Sergey Mkhoyan from 2009 to 2013 he headed the company “Tashir”. At the address of “Neftegazstroy” — Kaluga, St. Azarovsky, 2 registered several management companies of group “Tashir”: eponymous Foundation and the Association of companies “Tashir Monolith”, “Tashir invest” and others. At the same address the company is registered Kalugaglavsnab is one of the first assets Samvel Karapetyan, bought it back in 1997. Also SRO is the SRO “Union of construction companies “Tashir”, listed on the SRO website. 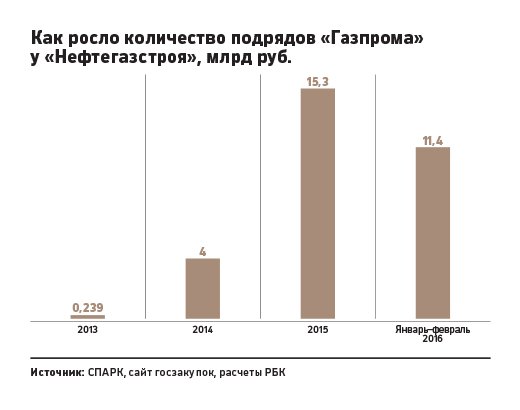 The question is whether the contractor is in a group of “Tashir”, the General Director of “Neftegazstroy” Sergey Mkhoyan said: “We are an independent company,” refusing to explain the coincidence of the address and telephone number of his company with the structures of “Tashir”. Mkhoyan confirmed that the company won the tender “Gazprom” on “Force of Siberia”, but to tell me such details did not.

Developer and each of “Gazprom”

In the Moscow market “Tashir” is known primarily as a development company. In 2004, the holding company began its first projects in the capital. The portfolio of “Tashir” has more than 40 operating, under construction and planned shopping centers, including the network of the shopping center “RIO”. According to Forbes, the income of “Tashir” from the lease in 2015 amounted to $610 million versus $1,08 billion in 2014. In 2015 the group of companies received the investment contract on reconstruction of old buildings of the newspaper and of the publishing house “Izvestia”.

Last year, after a wave of protests due to the rising tariff for electricity in Armenia, the Tashir group bought the Russian “inter RAO” and “Electric networks of Armenia”. Until the deal is closed only half: 50% of the Armenian network of cost Karapetyan $16 million, follows from the reporting “inter RAO”. To complete the deal is planned in 2016.

Karapetyan holds 26th place in the ranking of the richest businessmen of Russia Forbes magazine, his fortune is estimated at $4 billion.

In December 2015 Samvel Karapetyan said that “Tashir” and is interested in participating in the tenders Gazprom “Power of Siberia”, but the details refused to disclose. In an interview with the billionaire were told that they were going to participate in competitions at 16 billion rubles and 17 billion rubles that Gazprom announced in August of last year, but to apply for them has become. As a result, the contests were not held due to lack of participants. “We critically evaluated their options and decided at this stage to abstain. It is a strategically important object for the country, and you can’t fail, must have sufficient resources,” said Karapetyan . What construction company engaged in construction of main gas pipelines of large diameter, are included in the perimeter of “Tashir”, the billionaire did not specify.

Who else builds “Force of Siberia”

The first section of “forces of Siberia” Chayanda — Lensk length of 208 km without competition gave “Stroytransgaz” Gennady Timchenko in March 2015. The contract amount was not disclosed.

In late December Gazprom without a competition chose “stroygazmontazh” (100% owned by Arkady Rotenberg) the only supplier on five contracts for the construction of “forces of Siberia” in the amount of 197.7 billion rubles.

Gas supplies to China via the “Power of Siberia” due to start in 2018 in the amount of 5 billion cubic meters a year, and then grow to 38 billion cubic meters per year. Gazprom and Chinese CNPC signed a contract for the construction of the pipeline in may 2014. Its length will be about 3.2 thousand km Gazprom in its submission evaluated the cost of the entire pipeline of 800 billion rubles in prices as of 1 January 2011. The project “Power of Siberia”, including the construction of a pipeline and development of the infrastructure of the East Siberian deposits, and in may 2014 was estimated at $55 billion.