As in Milan and London

Italian jewelry and watch house Bulgari is planning to open an eponymous luxury hotel in Russia, said CEO of Bulgari Jean-Christophe Babin via the company representative. Details of the project in Bulgari did not specify.

Babin noted that the decision to develop a network of five-star hotels in the early 2000s proved to be correct: “Both lines of business [the jewelry and hotel] perfectly, because consumers are Bulgari, traveling, expect a high level of service, which they can obtain not only in boutiques of the brand, but when checking in the hotel: hotels are always located in good locations are filled with “mood Bulgari”.

At present, three of the hotel Bulgari in Milan, London and Bali. The company plans to 2017 to open hotels in Shanghai, Beijing and Dubai. According to the service Booking.com the cost of a double room in early April at the Bulgari Hotel Milano starts from 62 096 rbl. for a day at Bulgari Hotel London from 70 565 rbl., Bulgari Resort Bali — from 72 365 RUB. All three hotels are positioned as a resort; on the website it is emphasized that they, as a rule, close to shopping streets, where the shops of Cartier, Gucci, Tiffany&Co, Hermes, Louis Vuitton, etc. In Milan the hotel has 58 rooms, a Balinese — 59, in London — 85.

For the decoration of hotels Bulgari was responsible design company Antonio Citterio and Partners, the newspaper reported The Telegraph. The lobby of the hotels is in color gray granite, and all rooms are decorated with recognizable details, such as the pattern on the textile is made based on the nineteenth-century Bulgari brooch.

All hotels managed by an international hotel operator Marriott International, which also operates chains Marriott, Renaissance Hotels, Courtyard, The Ritz-Carlton. The Russian representative office Marriott has not responded to the request.

“A long time Marriott wants to bring hotel brand Bulgari in Russia, but somehow did not develop with the sites” — confirms a top-the Manager of another international company consultant in the real estate market. According to the head of another company that manages hotel real estate in Moscow, Marriott has considered sites in the capital and in St. Petersburg. A source close to the negotiations, does not exclude that we will choose one of the buildings in the city center on Bolshaya Nikitskaya.

According to another source in the market of premium hotels, Bulgari and Marriott are negotiating with several local developers and investors, among them — a minority shareholder of a network “the Magnet” Alexey Bogachev. Patterns controlled by Bogachev Bank “System” in the middle of 2015 gained control of part of a multifunctional complex “Park Pobedy” in the West of Moscow. At the beginning of 2014, as told earlier itself Bogachev, he bought the company “gals” a few floors in a skyscraper Sky Light for about $80 million, Forbes Magazine estimated the state Bogachev in 2015, $1.1 billion (74-th place in the list of the richest Russians). Bogachev himself refused to comment on the negotiations with Bulgari. 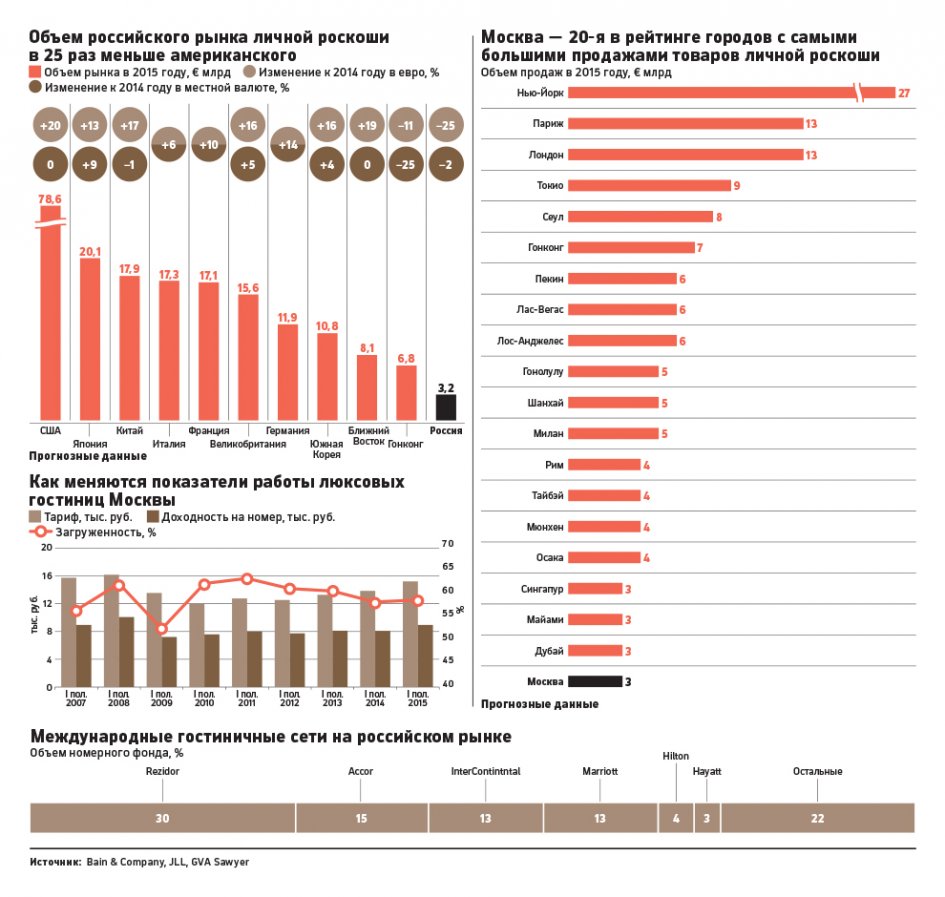 “As a rule, of a boutique format have a Central, unique location and are located in buildings that represent historical value, — says the head of the Department of hospitality JLL Tatiana Veller. — So, when we talk about the opening of Bulgari in Russia, they rather do not mean the construction of a new building from scratch and renovation of a historic building in the centre of the city.” According to Weller, the volume of investment depends on the building itself — its fragility, cost, approvals, etc. “This is an expensive product, Bulgari hotels do not model the network at the project, construction costs could be around €500-700 thousand per room”, — said Deputy General Director of CBRE Stanislav Ivashkevich.

According to JLL, today the luxury hotel segment is doing quite well: the average price and download showed growth by the end of 2015 and in Moscow and in St. Petersburg. This resulted from the reorientation of solvent demand, in particular guests paying in foreign currency, the most expensive of.

Bulgari intends to develop and jewelry business in Russia, although the local market is not Central for the company in terms of sales. According to Jean-Christophe Babine, in the medium term, Russia will be able to enter the top five largest markets for the brand. Chapter Bulgari noted that in the past two years, the weak ruble has had a negative impact on the purchasing power of Russians, but the first results of sales in 2016 are encouraging.

Bulgari hopes to build a network of 4-5 boutiques in Russia, at least three of them will open in Moscow. In December 2015 in Gum opened its first own shop Bulgari. Their own boutiques are developing in parallel with the network a long-standing partner of the company — a group Mercury.

The manufacturer of luxury goods Bulgari 100% owned by the holding company LVMH. The company was founded in 1884 by Greek sotirio Bulgari in Rome. Manufactures and sells jewelry, watches, accessories, leather goods, perfumes. Financial indicators are not disclosed.