MOSCOW, March 2. NOVATEK is asking the authorities to allow him to export gas to Europe through “Gazprom export”, writes the newspaper “Vedomosti”. The publication cites in its possession a letter from the Minister of energy Alexander Novak, the Russian President Vladimir Putin of 18 February. 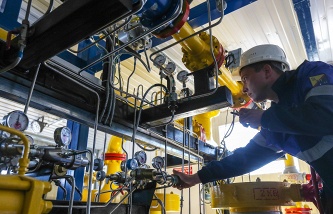 “Gazprom” in 2015, reduced supplies to the domestic market

Naftogaz: Kiev offers to negotiate with Russia on gas with the participation of the EC

Aksyonov: in the Crimea assets of “Naftogaz” no

It States that the Ministry of energy “in pursuance of Your instructions considered the appeal of JSC “NOVATEK” for gas supply for export to Europe through “Gazprom export” “preserving the principle of a single export channel”. The authenticity of the letter was confirmed by an employee of one of these companies.

NOVATEK offers to allow your Swiss trader Novatek gas & Power Gmbh (NGP, 100% owned by Russian companies) to supply European consumers with gas in Arcticgaz (JV NOVATEK and “Gazprom oil”), the letter reads. By the end of 2015, the trader has contracted to 3.1 billion cubic meters of gas, of which 0.7 billion cubic meters of Russian origin. NGP could have all the gas for European consumers to buy in Russia, so exports would have grown by 2.4 billion cubic meters per year, says Novak. The idea is that Gazprom bought gas in Arcticgaz the export netback price, says a person close to one of the companies.

Most of the portfolio is 2 billion cubic meters is provided by long-term contract with the German energy company EnBW, writes the Minister.

The proposal of “NOVATEK” the Minister requested to maintain: the export of Russian gas will grow, the budget will receive an additional 9.4 billion rubles in the form of export duties, and “Gazprom” will increase revenue at the expense of Agency fees.

With Gazprom NOVATEK this scheme not discussed, the company immediately appealed to Putin, said the source close to one of the companies. “This is an important issue for the state, and to decide it needs President,” he explains. But NOVATEK’s no desire to put pressure on Gazprom, it is rather an attempt to find an acceptable solution, said the newspaper’s source.

Representatives of Gazprom and the energy Ministry declined to comment, representatives of Putin and NOVATEK did not respond to questions from the newspaper. Their colleague from EnBW said that the company is pleased to be working with NGP.