SIMFEROPOL, March 2. /Corr. Alexey Konovalov/. The head of the Crimea Sergey Aksenov demanded to strengthen work on revealing of counterfeit alcohol in the shops of the Peninsula. 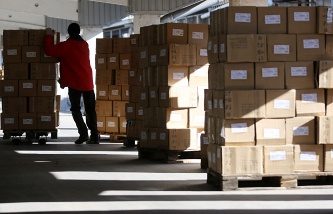 “With so many regulatory bodies of counterfeit alcohol to be generally should not. In this work all should be included systematically,” – said Aksenov at the meeting of the Commission to counter illegal turnover of industrial products. “The point is not to withdraw and to restore order. We need to support those who are operating legally and pay taxes”, – said the head of the Crimea.

The first Deputy Minister of industrial policy of the Peninsula Konstantin Ravich reported that in winter were carried out unscheduled inspections 54 business entities engaged in the sale of alcohol. Violations were detected in 15 of them. They mainly relate to the implementation of alcohol without special permit, license, with Ukrainian excise stamps of the sample or the sign of a fake. “Withdrawn 1747 bottles of counterfeit alcohol,” said ravitch. “This is a very little”, – was indignant in response to Feldman.

Counterfeit alcohol is sold freely even near the building of the Council of Ministers of the Republic of Crimea in Central Simferopol. This is the conclusion of assistants Aksenova, by order of the head of the Republic brought near the purchased alcohol directly to the Commission meeting. In the bottle of expensive whiskey, according to experts, was tea with alcohol.

“It’s all within walking distance, close comes. My friends, this will not work. We can tell you anything and anyone. But the experiment revealed the truth”, – said Aksenov. All bought within the experiment, the alcohol will go in the near future for examination in the laboratory of the Crimean Department of the Federal alcohol market regulatory service.