UN, 3 March. /Corr. Oleg Zelenin/. Russia has defended its economic interests from the effects of the new sanctions against North Korea, introduced on Wednesday by the UN Security Council in response to Pyongyang conducted a nuclear test. This was stated to journalists by the permanent representative of the Russian Federation to the UN Vitaly Churkin. According to him, tightened measures will not prevent the construction of the railway from Russia to the North Korean port of Rajin. 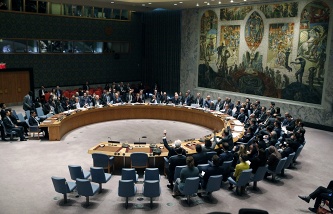 Without crystal and snowmobiles: the UN security Council imposed the most severe sanctions against the DPRK

The diplomat noted that the protracted negotiations on the text were between the US and China. In the end, Beijing “had chosen to adopt rather rigid and in some ways unprecedented measures of the sanctions pressure on North Korea”.

“In these conditions, we have agreed to that approach, – said the permanent representative of the Russian Federation. But, as in China, we have certain economic interests, which have nothing to do with the development of rocket and nuclear program of the DPRK”. According to Churkin, the Russian side has carried out additional consultations with the delegation of the USA, and achieved “to these economic interests were not affected.”

“In particular, (it) is quite a serious project of our Railways – the construction of the railway in the DPRK, which in some southern areas of China and South Korea will ship Russian coal,” – said the diplomat, adding that the project is now “as secure as our other economic interests”.

Adopted by the UN security Council resolution 2270 provides for an embargo on the export from the DPRK of a number of minerals, including coal. However, at the insistence of Russia, the document included a paragraph, according to which this prohibition does not apply to sourced outside the country’s coal, “the transportation of which was carried out across North Korea exclusively for export from the port of Rajin”.

As reported by Vitaly Churkin, in accordance with the resolution on the supply through the Rajin will need to notify the sanctions Committee of the security Council. Thus, the Russian Ambassador underlined that receive the Committee’s special approval for shipment will be required.

The road to Rason 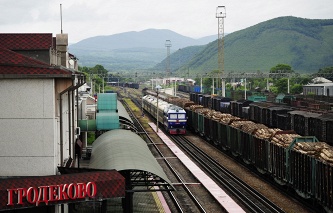 The volume of traffic by rail between Russia, China and North Korea through Primorye increased by 22.2%

The agreement to begin the reconstruction of the railway line from the Russian station of Khasan to the Rajin port and this as a pilot project to restore the TRANS-Korean railway was reached in 2006. The project started in October 2008 when an agreement was signed between Russian Railways and the Ministry of Railways of the DPRK on cooperation in its implementation.

In October of 2011 from Russia to the Rajin was a demonstration container train, which opened freight traffic between the two countries. In the future, when there will be links all over transorally highway from the South Korean port of Busan through North Korea to Russia, will be able to refocus on the Russian TRANS-Siberian significant portion of goods are currently going by sea from South Korea to Europe.

According to experts, Rajin has a number of advantages – it is non-freezing port on the Eastern coast of North Korea with developed infrastructure, which uses Russian standard gauge with a high degree of security for shippers and benefits for entrepreneurs.