SOFIA, March 3. /Corr. Igor Lenka/. The speaker of the State Duma Sergey Naryshkin has congratulated Bulgaria for a 138-th anniversary of the Liberation of the country from the Ottoman yoke during the Russo-Turkish war 1877 – 1878

In the letter, addressed to the participants of the memorial rally, which was held in the Bulgarian capital and was organized by the political party “Attack”, Naryshkin expressed confidence that the people of Bulgaria will never forget the heroism of Russian soldiers. The appeal of the Russian policy was read by the Deputy of the State Duma Nikolai Valuev. 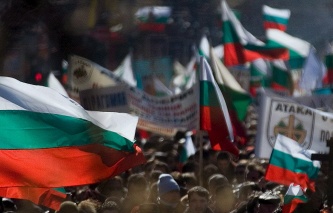 “This national holiday became a symbol of the intertwined fates of the Slavic peoples. More than 130 years ago, the defeat of the Turkish troops of the Russian army and the signing of a peace Treaty between Russia and the Ottoman Empire put an end to centuries of Ottoman subjugation, helped to restore Bulgarian independence. I’m sure the people of Bulgaria will never forget the heroism of Russian soldiers, because this memory is the surest Foundation of modern relations between our countries,” Naryshkin wrote.

“The brotherly people of Russia celebrates this holiday with you and heart is here,” said Nikolay Valuev to the meeting.

“In family relations between the brothers is it possible to count how many times someone who is saved, who forgave, who was rescued? The most important thing in a family is love. I’m sure that this love is today, tomorrow will be to unite our peoples. Therefore, I am convinced that Bulgaria has a great bright future, a great future alongside the brotherly people, with Russia”, – said Russian Deputy. His words were warmly welcomed by all the protesters who waved Russian and Bulgarian flags, chanted “Russia!”.

“Bulgarian and Russian people are connected by centuries of tradition”

In conversation with the correspondent of TASS Valuev stressed that Bulgaria and Russia celebrate a joint feast.

“Today we celebrate our holiday, because the Bulgarian and Russian Nations are linked by ancient traditions and greatest events. Today we celebrate the liberation of Bulgaria from the Ottoman yoke. We know very well what war is and it also Bulgarians know well. 138 years ago this country became independent and this happened because of Russia, that is why I am here today and would like to congratulate all Bulgarians on behalf of Russia, on behalf of the State Duma. I would like to see relations between Bulgaria and Russia, as in former times, grew again. In my opinion was a failure in the relationship between us, but through faith, through a common history, we will manage these difficulties to overcome”, – said Valuev.

Celebrations on the anniversary of the Liberation began with the memorial service, in memory of the fallen Russian soldiers and Bulgarian volunteers have served in the memorial Church St. Alexander Nevsky Bulgarian Patriarch neophyte. At the monument to the Unknown soldier, the ceremony of raising the national flag and wreath-laying. Together with the President of Bulgaria Rosen Plevneliev in it was attended by heads of diplomatic missions, politicians and public figures. Thousands of people gathered at the legendary SHIPKA, where there was a commemorative ceremony with the participation of Vice-President of the Republic Margarita Popova. Celebrations are held across Bulgaria.