MOSCOW, March 4. The price of flowers in Russia for the year (March to March) increased by 20-30% due to the strong dependence of the flower market from export sales and, consequently, the exchange rate. On the eve of March 8 should expect more price growth, but this upturn will be temporary, said the interviewed members of the flower market. 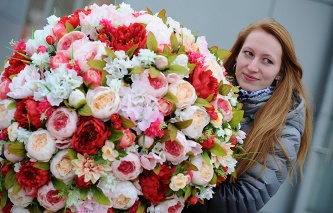 The price of flowers will rise for the holidays, despite the increase in supply 2.5 times

The dependence of the Russian market from imports – like flowers in General, and seed – has led to increased price tags on the bouquets.

“Prices have definitely increased. If you compare March 2015 and March 2016, the average for the Russian retail price growth amounted to almost 20%”, – said the press-Secretary of the flower delivery service “Florist.ru” Waist Akhmetov.

“If you take the year-on-year, prices increased by 20-30%”, – said General Director of the company Sergey Semenov. While getting more expensive all kinds of colors, he adds.

“Prices are rising all the flowers, because, practically, there is no domestic seed. And since the major players in the flower market sitting on 100% import, respectively, due to the devaluation of the national currency when buying flower rose”, – the expert explains.

As an example, he cited one of the most popular spring flowers – tulips. If in 2014 the wholesale procurement price of imported tulips were 16-18 rubles., this year from 26 to 30 rubles (including customs duties and taxes). Domestic flower buying at the end of February-beginning of March were more expensive – 30-35 rubles.

It is significant that the increase in prices comes amid falling demand for the products. “The purchasing power of the population, particularly in the goods not the first demand drops significantly. In the segment of corporate sales for almost a quarter of customers or otherwise reduce its budget for the gifts,” says the Waist Akhmetov.

By estimations of participants of the market, for the year falling demand for flowers as a whole amounted to not less than 20%.

However, many floral companies hope to earn in one of the few “bread and butter” days of the year – the 8th of March. Traditionally on the eve of this holiday the price of flowers start to grow even without accounting for currency fluctuations. 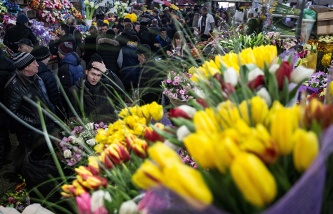 “First of all it is connected with increase of demand for flowers in the holidays, which means the increase in purchasing prices in the world flower auction”, – the company says “Florist.ru”.

The purchase price for individual plants could grow for stores in 2-2,5 times a week, said Waist Akhmetov.

Usually by March 8, the growth of the retail margin is about 30-40%, and this year is no exception, she adds.

According to Semenov from MegaFlowers, the price of flowers in retail could grow in the range of 30% to 50%. Most are significantly more expensive in the most popular holiday flowers – tulips, roses and hyacinths, daffodils, freesia. For example, during the holidays tulips in retail can cost 80-100 rubles per share. But right after the holidays the price will drop 20-30%, he adds.

“In the conditions of falling demand and rising exchange rate, producers are in no rush to build momentum. With nearly 100 percent of the so-called Russian Dutch flowers are grown from planting material”, – said Akhmetov.

Moreover, Semenov adds, the current situation “washes away” from the market of many small companies. “We register the departure of some smaller retail players. Wholesalers have it hard too, as on the wholesale market are quite low margins on products, and wholesale players have fixed the loss,” – said Semyonov. In a further reduction of the flower market will continue, the expert believes.