The European Commission (EC) recognized the agreement to build the TRANS Adriatic pipeline (TAP), signed by the Greek authorities with the company Trans Adriatic Pipeline AG, the relevant EU legislation, the report says the EC.

The document stresses that to Finance the construction of TAP will be funded entirely by private investors, and the agreement provided for a special tax regime will have a serious negative impact on the level of competition in the EU gas market, while the emergence of a new route of gas supply will significantly increase competition.

The EU authorities expect that the supply of gas on TAP will start from 2020, and further along the bottom of the Adriatic sea will be delivered annually to about 10 billion cubic metres which covers about 17% of Italy’s consumption and reduce the dependence of southern Europe from the current suppliers.

“Today’s approval of the agreement for TAP is an important step towards the realization of the project “southern gas corridor”, a key project for the energy security of the EU, the opening of Europe to new sources of gas,” — said the Deputy Chairman of the EC Maros Sefcovic, who oversees energy policy of the EU. 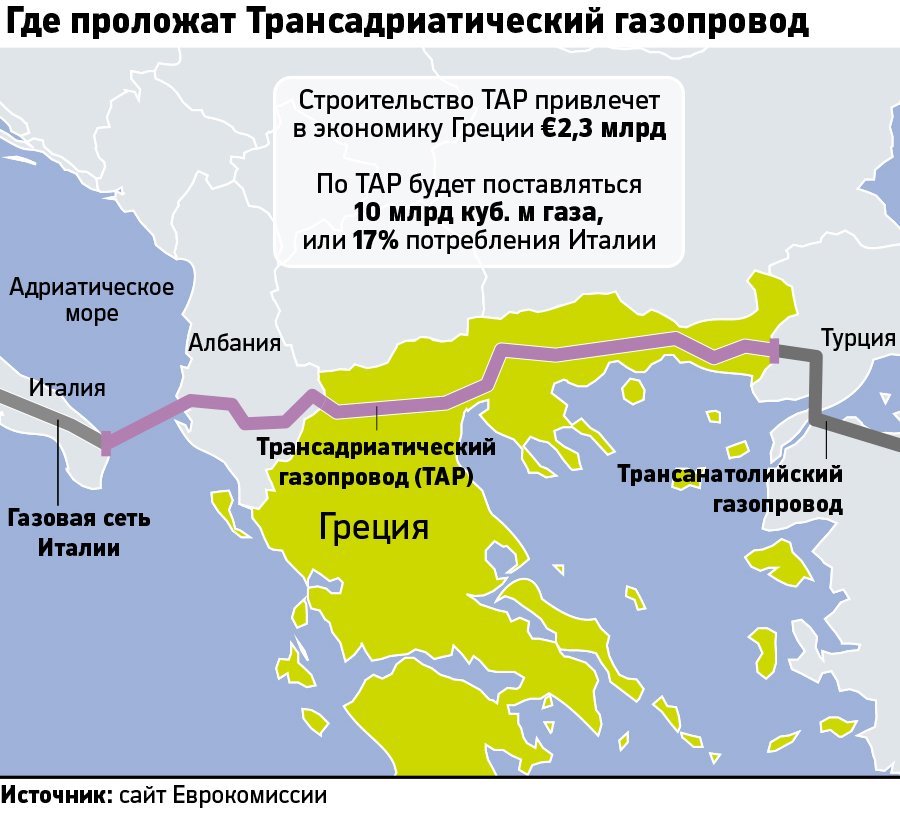 In turn, in Athens expect that the construction of TAP, a route which runs along the Northern border of the country from Turkey to Albania will attract in the economy of Greece at least €2.3 billion.

The implementation of the TAP project involved a Swiss company Trans Adriatic Pipeline AG whose shareholders are British BP (20%), Azerbaijani SOCAR (20%), Italian Snam (20%), Belgian Fluxys (19%), Spanish Enagas (16%) and Swiss Axpo (5%). Earlier participants of the project were also the Norwegian Statoil, French Total and German E. On, who for various reasons left the project.

TAP should be a continuation of the South Caucasus and TRANS-Anatolian pipelines, forming together with it the southern gas corridor to southern Europe via Georgia, Turkey, Greece and Albania to come gas from the Shah Deniz field, located on owned by the Azerbaijan sector of the Caspian sea shelf.

In Greece, through which must pass the TAP, last year “Gazprom” has put 1,98 billion cubic meters of gas.

Previously it was assumed to expand the supply of Russian gas to Greece and other countries in the region through the construction under the Black sea gas pipeline “South stream”, however, this project never received the support of the authorities of the EU and has been cancelled. Later, after the deterioration of relations with Turkey have been frozen and the project “Turkish stream”, in which Russian gas is planned to bring to South-Eastern borders through Turkey.

In December 2015 the Prime Minister of Turkey Ahmet Davutoglu and President Ilham Aliyev of Azerbaijan agreed to accelerate construction of TRANS-Anatolian gas pipeline with a capacity of 16 billion cubic meters per year. 6 billion will be used for delivery to consumers of Turkey and the remaining 10 billion to pump on TAP in Europe.