BELOKURIKHA (Alaisky region), 3 March. /Corr. Ksenia Shubina/. The volume of agricultural production in Russia grew by 40% over the past 10 years, reported the first Deputy head of the Ministry of agriculture of the Russian Federation Evgeny Gromyko. 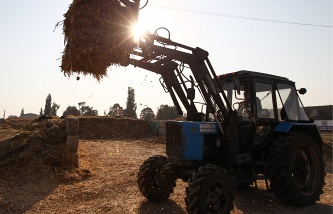 “The volume of agricultural production increased by 40% over the past 10 years, given the difficult state of the Technopark. Now Russia fully provides itself with grain, oil, sugar, potatoes”, he said at the IX Winter grain conference, which opened in the Altai region.

According to Gromyko, for the first time in many years in Russia managed to reach and exceed the threshold of the doctrine of food safety of meat production. “The share of domestic production in total resources has reached 89%. The Doctrine of food security is 85%, and in 2014 the indicator was at the level of 82%”, noted the Deputy Minister.

He also said that last year the supply of foreign food in Russia decreased by one third and amounted to $27 billion. “the Import of meat and poultry to Russia fell nearly threefold in recent years, we stopped being the largest importer in the world and seek this figure to reduce to zero. Despite the difficult economic and political environment, this year Russia exported goods to $ 16 billion – five times greater than it was 10 years ago,” said Gromyko.

“Overall, the volume of export of grain in Russia is planned for level 31 or 32 million tons, and assume that the rate which we figure out” – said the first Deputy head of the Ministry of agriculture. “In the future, this will allow Russia to return to the position of the world’s largest exporter of wheat – it is our calling card since the days of the Russian Empire”, – said Gromyko.