SIMFEROPOL, March 9. /Corr. Elena Bogdanovich/. Reconstruction of power grids of the Crimea, which are worn by 60% will require 41 billion. About it the correspondent of TASS said the Minister of fuel and energy of the Republic Svetlana Borodulina. 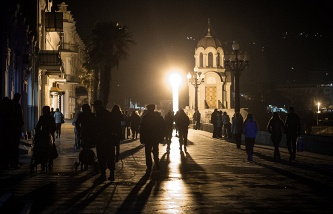 Poklonskaya: Crimea will not allow the festivals where the drugs promote

Aksenov: the problems with electricity supply in Crimea in the holiday season will not be

Novak: the cost of the power bridge to the Crimea will not change due to the devaluation of the ruble

“The network of “Krymenergo” are worn by 60%, this applies to both transmission networks and substations with voltage 220-330 kV and distribution networks 0.4-110 kV. Here the required total reconstruction of the grid complex taking into account schema changes to the income flow from the North to the East, for this purpose it is necessary to provide 41.5 billion rubles,” she said, adding that this year it is planned to spend 4.5 billion rubles.

Scheme of operation of the power system of the Crimea has changed after the cessation of flow from Ukraine and energy bridge across the Kerch Strait. “Previously, the flow of electricity came from the Northern part of the Peninsula. Currently the scheme is the supply of electricity is fundamentally changed, and the flow is on the Eastern side of the Crimea. Of course, this required a series of technical measures”, – explained the Minister.

For the launch of the energy bridge under Theodosius built substation “Kafa”: according to plan, it will allocate three-quarters of electricity coming from the Krasnodar territory. The fourth strand of the power bridge goes to the “Reed-Burunskiy” substation near Kerch. Interstate transmission lines (power lines) coming from the Ukrainian side, the supply of the Crimea is not involved.

More than two million inhabitants of Crimea were without electricity at the end of last fall – in the night of 22nd November 2015, when the Ukrainian activists blew up power transmission towers in the Kherson region of Ukraine. The power system of the Peninsula switched to the stand-alone mode of operation, was introduced a state of emergency, started to be applied to blackouts of consumers. The situation has improved with the launch in December the first phase of the power bridge from Krasnodar Krai with a capacity of 400 MW. Two more strands of the power bridge total the same capacity to be commissioned before the summer.