MOSCOW, March 9. State Corporation “rostec” plans to establish a Bank to Finance projects in the industry based on part of the Corporation of Novikombank, which, after the accession of a number of other assets can enter into ten the largest Russian banks, said in an interview with the head of Rostec Sergey Chemezov.

The Bank is the largest creditor of the Russian industrial enterprises with the volume of credit portfolio of about 150 billion rubles. The Bank became a public Corporation in 2011. As rostec, Novikombank is under Western sanctions, the Bank closed the access to Western capital markets. 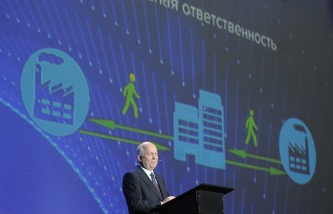 Media: rostec and UAC ordered the “daughters” transfer accounts in state banks or in the Bank

“Novikombank we had not so long ago. The decision is now in its recapitalization. In the future we plan to unite with several other banks, in order to create one large industrial Bank”, – said Sergey Chemezov.

A number of major Russian businessmen, particularly the owner of the aluminum giant “RUSAL” Oleg Deripaska, publicly complained about the lack of competition in the Russian banking sector, which is dominated by two large banks with state participation – the savings Bank and VTB. In their view, lack of competition leads to inflated interest rates on loans to enterprises.

Rostec was established in 2007 to consolidate state assets in civil and military applications, previously announced that the need for recapitalization of the Bank arose in connection with the sanctions against the Russian industrial companies, many of which are serviced by the Bank. Now part of the “Rostec” includes 664 company.

In January the Bank of Russia conducted an audit in the Bank, its results are not reported. Now Novikombank is among the top 40 largest Russian banks in terms of assets.

Chemezov said that after the accession of other Bank assets and create a Bank to Finance projects in industry, Novikombank plans to enter in ten the largest banks.

“This Association should increase our assets with the intention that as a result, our Bank became at least the ten largest banks in the country”, – said Sergey Chemezov. He emphasized that the banks that will be included in “rostec”, must be “clean” and not to have problems with capital, but specific objects to absorb the Rostec yet.

“Now specifics yet, but it is necessary for banks, which we plan to merge with the Bank were “pure”, without tails and holes”, – said Sergey Chemezov.

The head of Rostec said that he had a preliminary discussion on the creation of industrial Bank Chairman, Bank of Russia Elvira Nabiullina. According to Mr Chemezov, Nabiullina supported the idea.

Read the full text of the interview