Rostec has prepared a development strategy until 2025, which the company sees itself among such global giants as Boeing, General Electric and Samsung. About how the state Corporation plans to do, about the idea of creating a Bank to Finance industry and claims to the leadership of “AVTOVAZ” in an interview with the head of the Corporation Sergey Chemezov.

– Sergey Viktorovich, you give the company a very ambitious goal. What should be the rate of growth in order to achieve these goals?

– According to preliminary data, compared with 2014 growth in revenue will be more than 20%. This was a scheduled increase in the range of 17%. Now we use the effect of “low base”, when the holdings have significant internal resources to improve operational efficiency and cut costs, but I understand that it will only be harder because you will need to enter new competitive markets with appropriate products. I’m not sure that we will be able to achieve the same growth in the future. However, this is the task we have set for ourselves – to increase revenue by 17% annually. And if we grow at this pace, we expect to enter into the five of the largest engineering holdings in the world.

– What sources of capital do you see this growth?

– First, it is attracting outside investors. Secondly, the maximum profit of our companies by entering new markets and improving operational efficiency, with the subsequent reinvestment of these funds back in their development. It is necessary to bring enterprises and holdings to good state, which would spur interest in the market, and then it would be part of the companies to slowly start selling, attracting investors in the face of major business and financial institutions, and private investment. In addition, we want to encourage investment in management development holdings. We are almost ready bonus program for management – everyone gets a certain amount for the year depending on what results he managed to achieve, and then management takes a decision – either investing this money in the purchase of shares of the enterprise, or takes them and spends at its discretion.

– From the point of view of project financing is now the American and European markets closed to you. Do you negotiate with any Asian partners?

– While us major funding is required, we have enough of what we get domestically, using domestic capital market and improving cash flow, which generate holdings of Rostec. 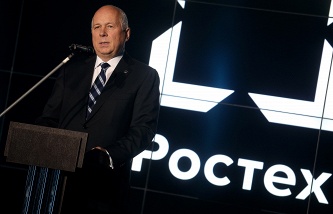 Chemezov did not see serious restrictions on Rostec because of U.S. sanctions

In addition, our facilities have interest from Russian investors.

If you take global projects, we will refer to Chinese or Indian partners.

This applies to large-scale projects, such as the Udokan or the construction of a gas pipeline in Pakistan, or refinery in Uganda – there is, of course, will attract foreign investment. Preliminary contacts have already been.

– When we talk about attracting investors, what holdings are we talking about? You spoke of the “Helicopters of Russia”, shvabe, KRET. What is your position in the search of investors for these assets?

– Now decided to sell packages in the holding “Helicopters of Russia” and KRET. And because these are enterprises of the defense industry, clearly, rostec will retain control. We received permission from the leadership of the country to sell 49% of both holdings of any investors – most importantly, that these investors were strategists – and then they will bring us not only money but also expertise and technology, and that is a priority for us, will give access to high-tech markets with high entrance barrier. We also do not exclude the involvement of a financial investor that will bring money, but be a passive participant in the management of the holding. But whether this investor, Russian or foreign.

– Do you personally tend to Russian investors?

– For each asset we will look separately based on the bids. Sale of packages will take place on the open market, at a public auction. Now we are evaluating assets, announced a competition for the appraiser. When evaluation will take place, we will announce the auction and will consider all offers.

– Privatization of these two assets – the case this year? In this case, the background of the difficult situation in the economy the demand for these assets may be weak.

– Yes, the question this year. As for the “Helicopters of Russia”, probably, we are unlikely to sell 49%, because the market is still in a difficult position. And 49% of the holding KRET, I think we can sell. And KRET, and “Helicopters of Russia” are growing five years in a row, pay good dividends, so for potential investors this is a promising asset.

– Are the Russian direct investment Fund (RDIF) and its funds partner to participate in transactions?

– They continue to show interest, and we discuss with them different options. RDIF can participate. Maybe they will go with the affiliate Fund.

– What share in the revenue of Rostec will hold military and civil products and what final products will you focus?

– Before the industrial Directors the task today is to increase the share of civilian products, no matter what this enterprise is the defense or producing dual-use products – up to 50% or more by 2025. The program of rearmament of the army is completed in 2020, and thereafter will be made the new program. It is already clear that the new program in the amount of government grants that are in the current program. We must understand it and not false hope.

– How long would it take to create the engine for the Russian-Chinese heavy helicopter? Who would do this?

– We are working on it, “United engine Corporation” is engaged, there have been developments, some of which we presented at the MAKS-2015. It (creation engine) is not a quick process, it will take at least two to three years.

– Will Egypt have to purchase the communications equipment and control for the “Mistral” and when may the contract be signed?

– We are in the negotiation process. We are ready to supply Ka-52 helicopter carriers (Mistral were sharpened by our equipment) and ensure delivery of equipment that was intended for them. While there is discussion, but no contract.

– You expect a reduction of the proceeds from sales of defense products? As it is now, and to what level you expect the reduction?

– Well, in absolute terms, we do not plan reductions. In relative, Yes – because we intend to increase seriously the share of civilian products, and the proceeds from sales of defense products to grow by increasing exports, which will help to offset the reduction in sales on the domestic market. Today the share of military production – about 70%. The share of civilian products – 28%. This is not enough. Need to take steps to ensure that this share to increase. We aim to bring the level up to 50% in 2020, and some companies have already committed to that.

– The production of some civilian goods should be developed in the first place?

– Each holding its own. An important milestone for the development of medical products. Optical holding company shvabe, in particular, manufactures, and medical equipment that is in high demand, some products are exported even in Switzerland. We make a serious bet on the IT, telecommunications, control systems such as smart city, robotics, new materials is a major point of growth for the Corporation, as these markets are growing and young.

– Do you plan to develop production equipment for production of hydrocarbons due to the fact that purchases of foreign equipment is restricted because of the sanctions?

– We before all enterprises are given a task to work with oil and gas the production equipment, pumps, and other equipment for production of hydrocarbons. UEC makes pumping pumps using their engines. In General, we try to maximize the range of these products in their enterprises.

– What are your plans for the banking assets of the Corporation?

– “Novikombank” we have appeared not so long ago. The decision is now in its recapitalization. In the future we plan to unite with several other banks, in order to create one large commercial Bank. This idea supports and the Central Bank. I met with the Governor of the Central Bank Elvira Nabiullina, spoke to her on the subject. She supports our decision. Now specifics yet, but it is necessary for banks, which we plan to merge with “Novikombank”, were “clean”, without tails and holes. This Association should increase our assets with the intention that as a result, our Bank became at least the ten largest banks in the country.

– Already have the assets rostec controls jointly with other investors. This, in particular, “AVTOVAZ”, which is now experiencing financial difficulties during the crisis. Have you discussed with the chief of Renault-Nissan Carlos Ghosn situation at AVTOVAZ and the ways out of it?

– We, and I in particular, many complaints to Andersson (Bo Andersson is the head of the automaker “AVTOVAZ” – approx.). He did a lot for the company came to the deplorable situation in which it is today.

The positive impact on the company is that it has updated its line of produced cars. But the foundations for the development of these models were made by the previous team of Igor Komarov. They started the X-Ray and Vesta. Andersson launched models in the series. However, his big mistake was that he did not actively work with Russian suppliers. He went the easiest path – signed contracts with suppliers of Renault and Nissan, where there is an organized system of production and supply. Andersson believes that the Russian suppliers of poor quality, but I always told him – needs to work with them and get to work themselves, to help them attract the same foreign partners to establish joint ventures. It will be interesting for foreign manufacturers in Russia – to buy quality products for rubles.

Such components could be imported, while receiving benefits. But he did not listen to my advice and as a result the upshot was that today we have losses at AVTOVAZ 75 billion. A serious proportion of this loss due to procurement of components.

– Can we expect a change of CEO of “AVTOVAZ”?