MOSCOW, March 7. In the Russian defense Ministry has called “journalistic investigation” Bellingcat about the alleged involvement of Russia to disaster Malaysian Boeing in the sky over Ukraine by distorting facts. 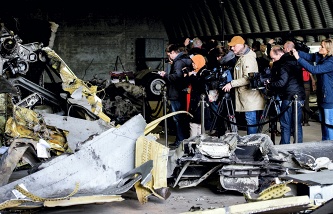 The Ministry of defence of the Russian Federation has never commented and does not seek to comment on the various speculations that are distributed in the network, said the Agency. However, given the large number of requests coming into the office regarding the recent so-called journalistic organization Bellingcat about the alleged involvement of Russia to the collapse of the Malaysian Boeing in the Ministry of defence would like to note the following.

“The main goal of falsified data Bellingcat is trying to prove the presence of Russian forces in the expected area of the missile that struck the Malaysian aircraft on 17 July 2014 over Ukraine,” the Ministry said.

Thus, to date, no one still has not provided real evidence of the presence of Armed Forces of Russia in Ukraine, noted in the Department.

The authors of the report to confirm its findings uses data from social networks, various “fake” publications from the Internet, as well as their own questionable materials, which under no circumstances cannot be considered as real evidence of the involvement of the Russian side in the conflict in Ukraine, convinced the Russian military.

The latest report of Bellingcat, however, as all previous ones, is also based on pseudopotto, according to the defense Ministry. As evidence of the presence of Russian troops in Ukraine is one photo of the alleged militant, allegedly made in the area of missile launch “Buk” July 20, 2014, i.e. after the crash of the Malaysian Boeing. Solely on this dubious material Bellingcat, and make a conclusion about the presence of Russian troops in the expected area of the missile launch.

These pictures are of people, contrary to unsubstantiated statements Bellingcat, has no relation to the Armed Forces of the Russian Federation – it never was the Russian military. This can easily make anyone spending a little time on the Internet, explained in the defense Ministry.

Besides, on the authenticity distributed Bellingcat, photos in his time clearly expressed the developers of image analysis, data on which was based one of the “studies” of bloggers. According to the developer, work Bellingcat, is an example of how it is impossible to analyze and process the images.

In addition, noted in a press-service, honored the Western media with a strong reputation has also repeatedly denied their investigations, the findings of Bellingcat, pointing to bezdeystvuete their findings and the lack of any competence.

“What can say, if in his conclusion themselves pseudo-experts stated that at the moment there is no possibility to provide objective evidence in their so-called “research”?, – ask a question in the Ministry of defense.

“With all this, is just amazing the fact that such dubious material takes into account the Joint investigation team of the Association, officially heading the investigation and claiming to objectivity and professionalism, – emphasized in the Russian military Department. At the same time this group is on the threshold refuted the evidence base of the Federal air transport Agency, just saying that all of this “uninteresting””.

“”Uninteresting”, probably because these data do not fit into the predetermined model of the tragedy. Believe that the study of and rigorous analysis will be carried out without exception, all data relating to the tragedy with Boeing,” stated in Minoborony.