MOSCOW, March 9. Russia has not yet introduced mandatory certification of dairy products and the documents accompanying the packaged drinking milk in Russia from manufacturers no one requires. About this informed the Deputy head of the Rosselkhoznadzor Nikolay Vlasov. 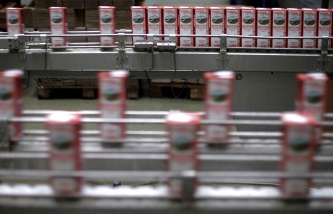 On 9 March, the newspaper “Kommersant” reported that the reluctance of the Russian dairy industry from March to issue veterinary accompanying documents for packaged drinking milk can lead to production losses and higher prices for milk.

“No mandatory certification now required. Voluntary and has the right to be, if the product owner wants”, – said Vlasov. This item is written in the law about veterinary medicine, he added.

However, the law prescribes the registration of all veterinary accompanying documents only from the beginning of 2018, said the Deputy head of the Rosselkhoznadzor.

The law clearly says, the products that are not subjected to certification at the time of entry into force of this act, subject to certification mandatory from 1 January 2018. That is, the packaged milk to certify now nobody requires

Nikolay Vlasov
the Deputy head of the Rosselkhoznadzor

“What “Soyuzmoloko” now raises this wave – the next stage of their fight against electronic certification as such,” – said Vlasov.

Accordingly, no predicted growth of producers prices for milk in Russia should not wait, said Vlasov. “Nothing happened – milk did not become less expensive and it has not become”, – he assured.

The head of the State Duma Committee on agrarian issues Nikolai Pankov also notes that produkcyjne milk will rise in price because there is no reason.

“Dairy products should not appreciate, for there is no reason. Consider untenable statements by the representatives of multinational companies such as PepsiCo, Danone, the owners are foreign citizens,” Pankov was quoted by his press service. According to the head of the Duma Committee, the manufacturers often think about its own profits, without worrying about product quality. “Thus, it may be trying to hide its origin,” he added.

Pankov reminded that dairy products previously subject to veterinary certification, and this has not caused any claims from the manufacturers. “A rule about which today speak of the Corporation, shall enter into force only from 1 January 2018 and relates to a product recycling”,- said the Deputy.

In the list of products subject to mandatory certification, including milk and cream, curdled milk, yogurt, kefir and other fermented or sour milk, whey, concentrated or not concentrated, with or without added sugar or other sweetening matter; products consisting of natural milk constituents, butter and other fats and oils derived from milk; dairy spreads, and cheese and curd.

The appeal of the Union of manufacturers of milk to Dvorkovich

The national Union of milk producers (Soyuzmoloko) appealed to the Vice Prime Minister of Russia Arkady Dvorkovich, the head of the presidential administration Sergei Ivanov and the Deputy head of the Ministry of economic development Oleg Fomichyov with a request to recall the order of the Ministry of agriculture N648, which requires manufacturers of packaged drinking milk to issue veterinary accompanying documents in paper form in respect of each batch of product produced from March 2016.

According to “Soyuzmoloko”, to execute the documents necessary from the moment of entry into force of the order, i.e., March 2016 However, Vlasov indicates that the priority is the current law on veterinary medicine. “We have not one document but two. The first document is the law about veterinary medicine. This norm of greater legal force,” he said.