The UN, on March 10. /Corr. Oleg Zelenin/. The veto is the cornerstone of the whole architecture of the UN and encourages members of the Security Council on a compromise. This was stated on Wednesday by the permanent representative of the Russian Federation to the UN Vitaly Churkin at an informal meeting of the General Assembly of the world organization for the reform of the security Council. The text of the speech of the diplomat published on the official website of the permanent mission.

“The veto was the cornerstone of the whole architecture of the UN. Without it, would be deprived of the whole structure stability. Without the veto, the Security Council could become a body, create solutions, focusing on controversial or impose a political line in international relations, political line, not always involves the respect for the legitimate interests of all member States of the UN,” – said Churkin.

He drew attention to the fact that the number of countries seeking the abolition of the right of veto granted to the five permanent security Council members (Russia, UK, China, USA and France), in the past appealed to Moscow “with the request to use the veto to protect their national interests”. “I would like to ask a rhetorical question: are these countries and groups of States to claim that with such requests they will not to contact us ever in the future? In this regard, we recall, maybe not quite diplomatic Russian proverb: “do Not spit into the well useful water to drink”, – said the permanent representative of the Russian Federation.

During the meeting of the General Assembly, held in closed session, some diplomats have called the veto power is a relic of the past that must be abandoned. Vitaly Churkin agreed that “peace now is not what it was in 1945”. “But he is still very far from the harmony that is necessary to the UNSC without the veto has not lost its relevance,” said he. 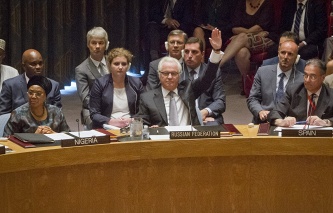 The use of the veto in the UN security Council. Dossier

In response to the criticism of those who recalled Russia blocked resolutions on Syria with the threat of sanctions against Damascus, Churkin urged them not to forget that in the beginning of the crisis in the Arab Republic some members of the security Council, has sought regime change in Damascus, not allowed to adopt a resolution on the political settlement similar to the one that was approved on 18 December 2015. “And they had a certain majority, so did it without the use of the veto”, – said the permanent representative of the Russian Federation.

He also noticed that when in the UN security Council reviewed the decision to start bombing in Libya, Russia veto is not used. “The consequences are well known. So the problem is not in the veto, and in politics, which leads to devastating results,” the diplomat said. He urged to continue to discuss the veto power as a separate theme, and “in the context of the expansion of the UN security Council”. According to him, it is necessary to decide “whether the extended SA new permanent members, and if so, will they have a veto power”.