March 15, the Board of Directors will discuss the issue of resignation of the President of the company Bo Andersson. The initiator is the Russian state Corporation rostec, which owns a blocking stake. The second shareholder — the Renault-Nissan Alliance agreed to early terminate the powers Andersson, although his contract was due to expire in December 2016. According to a source in the company, the new President will be the candidate from Renault-Nissan, and the person who proposed the “assistance” will lead the Board of Directors of automobile companies. According to the shareholders, such a management structure will lead the company out of the crisis and avoid the mistakes of Andersson.

When Andersson in 2014 became head of the AVTOVAZ shareholders have set a task to make the company profitable. The new leader started with cost optimization, primarily with procurement of components. Consumables and components make up about 75% of the cost of VAZ cars.

Management began to demand that suppliers lower prices by 2-5% annually, told contractors of AVTOVAZ. In addition, the timing of payments for shipped products increased from 40 to 60-70 days. Dissent suppliers of AVTOVAZ were replaced by others including foreign. In particular, the plant refused from the seats Togliatti “of JSC “avtovazagregat””, and thus he was on the verge of bankruptcy.

By the end of 2015, the loss of AVTOVAZ amounted to 74 billion rubles, and Chemezov believes that the reason for foreign suppliers. In a press-service of the Corporation argue that the cost of Lada was higher sale value due to growth of prices for components. “We need to work with our suppliers to help them to provide quality products. He refused to follow this logic,” reported the review Chemezov through the press service of Rostec. According to the accounts of AVTOVAZ, the cost of sales of cars in 2015 exceeded the revenue of the plant by almost 6 billion rubles 182,3 billion against 176,5 billion rubles respectively. Decreased and the level of localization. For example, in the summer of 2014, Andersson said that the localization of Lada Largus reached 61%. Through the year the index decreased by almost half, reported “AUTOSTAT”.

The head of Alliance Renault-Nissan Carlos Ghosn believes that the loss of AVTOVAZ not to blame Andersson, and the Russian economy. “I don’t think that today in Russia there is at least one automaker that operates without loss. The automaker that can make money when market down 50%, I would have granted this special award,” he said.

AvtoVAZ suffered not only because of rising prices on foreign auto parts because of the devaluation of the Russian suppliers raised the prices, since they use imported raw materials, explains the analyst of “VTB Capital” Vladimir Bespalov. According to him, foreign auto parts needed to improve the quality of new models. AvtoVAZ raised prices for Lada slower devaluation and, if the correction is proportional to, sales would have fallen even more, indicates Bespalov. 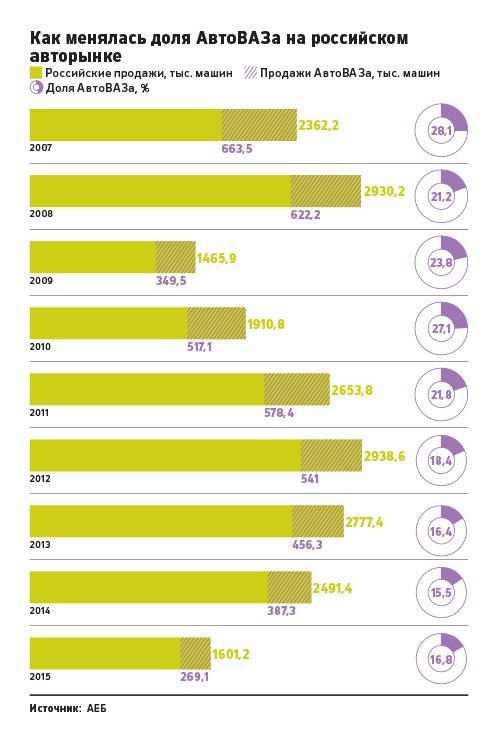 Claim the second: I bought a plant of “Rosteh”

Andersson desire to work with foreign suppliers and was contrary to the business interests of Rostec. The Corporation belongs to the largest Russian holding company producing automotive components “United automobile technologies” (OAT). The share of OAT accounts for about 40% of purchases of AVTOVAZ. To avoid problems with loading capacities of OAT, Chemezov at the beginning of 2015 seems to be convinced Andersson to redeem the holding automotive components to AVTOVAZ. The asset was valued at $165 million, the deal is planned to close by September 1, 2015. But against was Renault-Nissan, and Andersson didn’t argue with the controlling shareholder. That is what ruined his relationship with Chemezov, said sources close to AVTOVAZ and at the plant.

Andersson in an interview said that OAT could not withstand the competition. “I tell all suppliers that the customer awaits the fulfilment of the five conditions of quality, performance delivery, service, price and terms of payment. OAT is a critical supplier of AVTOVAZ, and we show what is acceptable and unacceptable in a relationship with us,” he explained. The question about buying part of the business of the OAT is not closed, is due diligence.

Buy OAT would allow to control the quality and delivery time of components, but it would be difficult for AVTOVAZ to develop the asset, said managing partner EURussia Partner Ivan Bonchev: “the Production of automotive components is not within the competence of the plant. Finally, vertical integration in production contrary to world practice”.

Sources at AVTOVAZ and former plant managers say that the main mistake Andersson was the transfer of production of the new model of AVTOVAZ Lada Vesta on “IZH-Auto”. According to their estimates, just because of logistics costs components (between Tolyatti and Izhevsk in the order of 600 km) the cost of the car increased by 25-30 thousand rubles depending on configuration. Besides the build quality on “IZH-a Car” worse than at AVTOVAZ, according to the interlocutors.

Localization of Vesta was below the expected level. In September last year, Andersson stated that in the first phase of production models localization level will be 75%, but, according to “AUTOSTAT”, was below 50%.

The idea to relocate the production of Vesta in Izhevsk was, apparently, to load the power plant, which was highly unprofitable, says Bespalov.

Due to the transfer of production of Vesta in Izhevsk hurt the economy and Lada Xray — the second of the novelties of AVTOVAZ. In 2012, the then head of AVTOVAZ, Igor Komarov said that the Xray will be collected on the platform Vesta. But Andersson decided that the SUV better be done on the platform of Renault. It costs the AVTOVAZ more than their own, explain the sources . Besides effective localization model was only 22%.

Initially, the price Vesta was planned from 400 thousand rubles., but on sale it came from 514 thousand for the basic version. Dealers of Lada tell you that the high price scared off buyers of the vehicle in the regions on the main market of AVTOVAZ. The sale of Vesta began on 25 November 2015 and the end of the year the company planned to sell 5-6 thousand cars, but it turned out to 2.8 million In 2016, the company planned to produce 60 thousand of Vesta, but in January, it sold only 1.6 thousand sales Data Xray don’t have — they started in mid-February.

According to Bespalov, if Xray planted on the platform of AVTOVAZ, the launch date of the model in production are able to move.

Vesta and Xray were financial to improve AVTOVAZ, but, according to sources among contractors of the plant, both models bring the plant to a loss of 160 thousand and 180 thousand rubles per car, respectively.

Chemezov did not like the personnel policy and Andersson. For 2014-2015, the automaker reduced the staff by about 19 thousand people, or 28%, to 48 thousand employees. In the fall of 2015, the head of Rosteh was indignant that the people kicked out into the street, and promised to spend Andersson “educational work”. In November 2015, the shareholders rejected the management developed plant budget for 2016.

In an interview in December 2015 Chemezov said that the cut is on the principle of “half go, and the rest are” you can’t. “In 2008-2009 the plant has been reduced by nearly 45 thousand employees (about 40% of employment. —). But there was no noise, was a carefully structured process, we worked jointly with the regional authorities and the Ministry of labor. Find new jobs, moved people, had training, they acquired new profession, he remembered.

According to the Deputy Chairman of the Tolyatti municipal Duma Alexander Denisov, 720 thousand inhabitants of Togliatti, about 250 thousand people associated with the plant (including associated companies and families of their employees). Mass reduction may lead to social protests, as happened in the village of Pikalevo of Leningrad region in 2008. Then were stopped three largest cement enterprises of the city. To reassure residents visited the then Prime Minister Vladimir Putin.

Under the new management of AVTOVAZ layoffs will continue, otherwise it will not solve the problem of losses, I am sure the Deputy Chairman of the RSPP mechanical engineering Vladimir Smetana. He recalled that Andersson was reduced 50 thousand people, when he was President of Gas. AvtoVAZ has been unprofitable for years, and Andersson tried to restore order at the plant, but did not consider only the sudden collapse of the ruble, which will kill any business, sums up the expert.