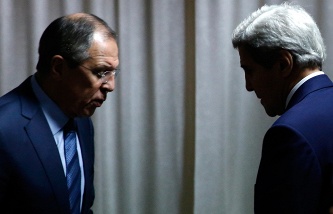 “Subject was continued discussion of ways of settlement of the Syrian conflict on the basis of Security Council resolutions and UN 2254 2268, activities co-chaired by Russia and the USA International group support Syria and its task forces,” – said in depodesta.

“The Minister and the Secretary exchanged views on the implementation of the agreement on cessation of hostilities between the conflicting sides in Syria, with the exception of dealing with terrorists, – said the Russian foreign Ministry. – The necessity of further deepening Russian-American coordination in the military area in order to facilitate the observance of the truce and the expansion of humanitarian access locked areas. The interlocutors expressed hope that the forthcoming Geneva talks between the Syrian government and the whole spectrum of the opposition under the auspices of the UN will be held in strict accordance with the requirements of the inclusive inter-Syrian dialogue and to ensure the interests of all ethnic and religious layers”.

The Russian foreign Ministry reported that during the conversation, also “addressed the issues of support of UN efforts to end the war in Yemen and the commencement of negotiations on a political settlement in that country”. “They discussed some other topics on the international agenda, including the situation in Lebanon and the challenges of implementation of the Minsk agreements to resolve the Ukrainian crisis, as well as certain aspects of bilateral relations”, – informed in depodesta.

“Sergei Lavrov drew attention to the need to end a heated U.S. targeted anti-Russian media campaign in the West, which does not contribute to practical cooperation in areas of mutual interest”, – said the Russian foreign Ministry.