“We appreciated the level of Russian-Chinese cooperation, – said the Russian Minister. – This level is the best in the history of our relations”.

“We discussed a schedule of political contacts, including preparations for the upcoming this year the visit to China of Russian President Vladimir Putin – Lavrov said. Heads of States will discuss bilateral issues and cooperation in international Affairs and in the margins of the summit “group of twenty”, which this year will be held in China’s Hangzhou in September. And at the end of the year the planned visit to Russia the premiere of the state Council of China Li Keqiang to attend the next 21st regular summit of heads of governments of Russia and China.”

According to Lavrov, Moscow and Beijing have reaffirmed the line on non-recognition of nuclear ambitions of Pyongyang.

At the meeting, priority was given to the situation on the Korean Peninsula. “Confirmed with both parties consistently seek to uphold the non-proliferation regime and the non-recognition of nuclear ambitions of Pyongyang – said Lavrov. – Both Russia and China advocate the adoption of such measures, which, on the one hand, would prevent further development of North Korean missile and nuclear programs, on the other hand – would not lead to escalation of tension in the region, not blocking the possibility of political and diplomatic settlement”.

Earlier, opening the talks with the head of China’s foreign Ministry, Lavrov stressed that Moscow intends to improve trade and economic cooperation with Beijing.

“All – round deepening of cooperation with China is a priority of our foreign policy – Lavrov said. – We are focused on strengthening our strategic partnership and interaction. It is in the fundamental interests of our peoples”. 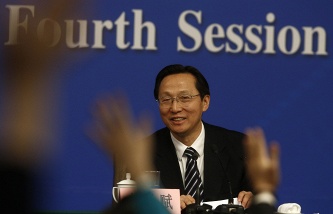 The Ministry of agriculture of the people’s Republic of China: Russia and China need to develop bilateral investments in agriculture

The Minister expects that this year the political dialogue will be no less intense than in the past.

The Minister also said that cooperation between Moscow and Beijing on international Affairs is becoming an increasingly significant factor in world politics.

“Our interaction in international Affairs is becoming an increasingly significant factor in world politics, shows a balanced approach in solving problems, he said. – We seek to solve problems on the basis of international law, primarily the UN Charter”.

“It is on the basis of these principles we coordinate our cooperation in the UN security Council, the SCO, “twenty”, BRICS, within the framework of the East Asia summit and in other formats, – said Lavrov. – All of these areas is covered in detail in our plans, consultations, another sign today”.