MOSCOW, March 11. Statements of Kiev about the “imminent return of Donbass” suitable only for propaganda and divert Ukrainians from domestic problems.

This was stated by the permanent representative of the Russian foreign Ministry to the OSCE Alexander Lukashevich at a meeting of the Permanent Council on the situation in Ukraine. Text of the speech posted on the MFA website. 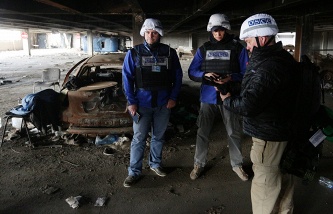 “The rejection of substantive discussion and compromise with Donetsk and Lugansk, loud statements about the imminent “return of Donbass” suitable for propaganda and distract the population from domestic problems, he said. – However, this tactic leads to protracted crisis, what objectively is not interested neither the Ukrainian people nor its neighbours”.

Lukashevich said that “in General the core of the Minsk process is a direct dialogue between Kyiv and Donbass, whether the security aspects or the political process”.

This Lukashevich pointed to the words of the adviser of the President of Ukraine Vladimir Gorbulin, stating that “the potential is exhausted diplomatic means of solving problems of the conflict in Donbas”, “main and only stratagem of the Ukrainian state to win time and accumulate strength”, “soon will be active and effective involvement of another instrument of foreign policy activity – the armed forces.” “Until everything is confirmed,” – said Russia’s permanent representative to the OSCE.

According to Lukashevich, it is a vicious logic, which assumes that the Minsk agreement harmful to Ukraine and should not be performed. “Our approach is the opposite – he stressed. – We believe that implementing at least the first stage of the policy process – coordination of all the key issues of the elections at the Donbass can be accelerated”.

About the attack on the diplomatic mission of the Russian Federation 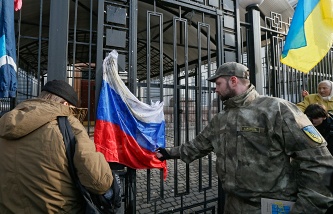 Lavrov: attack on Russian Embassy in Kiev is outrageous

“I didn’t notice any decisive actions of Ukrainian law enforcement bodies in ensuring security of the Russian diplomatic mission in Kiev, he said. – Present in the room must be well-aware how and under what norms should be ensured the inviolability of diplomatic missions. These tricks can be continued today.”

Lukashevich pointed out that under the banner of the “Right sector”, “Freedom”, “Aydar” were “bandits who live in extortion from freight transport and civilians.” “It is normal when the MP is taken in a foreign diplomatic mission, to disrupt the national flag, as it was in the Russian Consulate in Lviv”, – said the permanent representative.

“All of this proponents of “Western values” are still watching eyes wide shut, if only continued the course of reforms, for which gullible people on the Maidan were fed biscuits,” added Lukashevich.

Russia calls on Kiev, the German presidency of the OSCE and its Special monitoring mission (SMM) of the OSCE in Ukraine to take steps to prevent provocations, such an attempt to capture the neutral land in the area of Yasinovataya 5-8 March, also said Lukashevich.

“During 5-8 March, an incident occurred provoked by the attempt of the Ukrainian military to capture another neutral land in the area of Yasinovataya, North of Donetsk, – he reminded. – Not surprised that Kiev rushed and in this case to accuse the militia in “operation false flag”. This is a “brand” accept.” 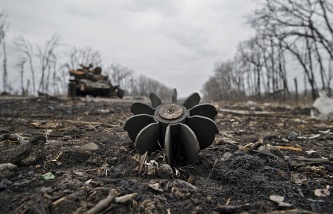 Lukashevich noted that in this situation of particular concern is the fact that this was done immediately after signing the contact group on 2 March important agreements on mine clearance and the cessation of educational firing. “We call on Kiev, the German presidency of the OSCE and the SMM to take the necessary steps to prevent such provocations in the future,” added the envoy.