MOSCOW, March 11. State Corporation “rosteh” and the representatives of the Russian government are negotiating with a sovereign wealth Fund Mubadala from the United Arab Emirates (UAE) to participate in the sale of shares in the company “Helicopters of Russia”, a member of the Corporation.

About this stated the head of Rostec Sergey Chemezov. 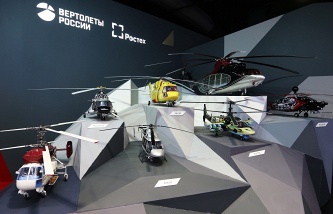 In the privatization of “Helicopters of Russia” can take part foreigners, and the investors of the Russian Federation

“We were negotiating with Mubadala. Recently, the Minister of industry and trade Denis Manturov went on a business trip to the UAE, met with them, and this topic was the conversation”, – said Sergey Chemezov.

Manturov then, in particular, noted that the holding “Helicopters of Russia” to the investor can be held this year. According to him, considered two options. “It’s always such a creative search for possible options. Or it will be a strategic investor from Russia with possibility of sale to 49%, or it will be foreign, but then it will 25%”, – said the Minister.

“The end of the year I expect that it will be not only decided, but also made investment in itself”, he added.

We will remind, the volume of Russian exports to the UAE in the area of military-technical cooperation over the past 10 years exceeded $1 billion In June 2013 the Russian direct investment Fund (RDIF) and Mubadala established a joint Fund of $2 billion.

“Helicopters of Russia” is the only developer and manufacturer of helicopters in Russia, it consists of five helicopter plants, two design bureaus, as well as enterprises for the production and maintenance of components, aircraft repair plants and service company providing after-sales support in Russia and abroad.

Holding “Helicopters of Russia” increased its net profit for the first half of 2015 according to the international financial reporting standards, compared with the same period of 2014 almost tripled to 12.9 billion rubles (4.4 billion rubles a year earlier). The company’s revenue for the period amounted to 87,2 billion rubles, an increase of 26%. 98% of the shares of the holding are the “Oboronprom”, which, in turn, 84% owned by rostec Corporation.