MOSCOW, March 11. The Federation Council member Dmitry Sablin, will participate in the primaries of “United Russia” on selection of candidates for elections to the state Duma on single-mandate Novomoskovsk district of the capital. He said this today.

“202 district of the city of Moscow is a New Moscow, Troitsky and Novomoskovsky administrative Okrug”, – he said.

As have informed on Friday a press-service of the Moscow branch of “United Russia”, Sablin filed documents for participation in the primaries on March 10. According to the Senator, quoted by the press service, the idea of early voting will help to unite society. “We are in quite a difficult situation, foreign policy, international. And it is very important to “pass down” to talk, maybe even debate,” said Sablin.

His desire to return from the upper chamber of the Duma he explained the requirement of the time. “Now is the time when we need to be closer to the people. I began my political career as odnomandatnik. Probably, if the State Duma elections were on the list, I would have stayed in the Federation Council”, – he noted.

Sablin is a member of the Committee of Federation Council on defense and security, has been appointed first Deputy Chairman all-Russian public organization of veterans “Combat brotherhood”.

February 15 at “an United Russia” has started the nomination to participate in the primaries (the primaries) for the selection of candidates for elections to the state Duma. Till April 15, must have completed the registration process of participants. They may be either members of the party or non-party. 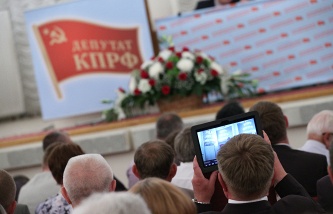 The primaries will be held across the country on may 22. They will be secret and rating. This means that each voter can vote for one candidate, but for multiple in each list. The party leadership hopes that this will help to identify opinion leaders. Directly on the eve of the primaries, the candidates will meet with voters and other campaign events and participation in them is mandatory. For the preliminary voting was created by the Federal organizing Committee, as well as regional 85. About a third of their members – representatives of public associations, mass media, leaders of public opinion.