MOSCOW, March 11. The European court of human rights as a priority will consider the complaint of Left front coordinator Sergei Udaltsov, who was convicted for organizing mass riots on Bolotnaya square in Moscow in 2012.

“The ECtHR communicated and gave priority to the complaint Udaltsova for inhuman treatment, lack of fair trial, unlawful composition of the court, the violation of the right to protection, right to freedom of expression and Assembly (articles 3, 6, 10, 11 of the Convention),” – said his lawyer Dmitry agranovskii.

The lawyer explained that the European court has put before the government of the Russian Federation ten questions that must be answered until 4 may this year.

May 6, 2012 authorized an opposition rally on Bolotnaya square escalated into riots. According to the Main Department of MIA in Moscow, in the action participated about 8 thousand people.

Affected more than 30 police officers, several dozen people were injured. On the same day for illegal actions were arrested more than 430 people. The investigative Committee opened a criminal case under part 3 of article 212 (Mass riots) and part 1 of article 318 (“Violence against representatives of authorities”).

January 10, 2013, it was merged into one proceeding with the criminal case against Udaltsov, his assistant Konstantin Lebedev and Leonid Razvozzhaev, an assistant state Duma Deputy Ilya Ponomaryov. 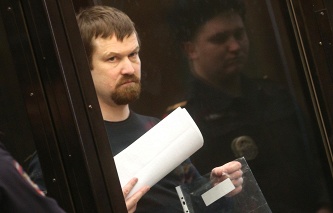 The ECtHR took into consideration the complaint Razvozzhaev on the sentence

October 5, 2012 on NTV showed the film “Anatomy of protest-2”, which presents footage of Udaltsov, Lebedev and Razvozzhaev are negotiating with the head of parliamentary Committee of Georgia on defence and security Givi Targamadze and discussing the issues of preparation of mass riots in Russia. A few days later, on October 17, the Main investigation Department of the investigative Committee opened a criminal case under part 1 of article 30 and part 1 article 212 of the criminal code (“Preparation for organization of mass riots”).

During the investigation the victims were found about 85 people, the business scope was 90 volumes. The damage from the riots is estimated at 28 million rubles as the accused were involved in more than 30 people. Some of them criminal proceedings were terminated as a result of the Amnesty declared to the 20 anniversary of the Constitution of the Russian Federation.