MOSCOW, March 11. The Ministry of justice of Russia received a request from Ukraine on the transfer of Director Oleg Sentsov and three more convicts the citizens of Ukraine and will consider it within 30 days. About it reported in a press-service of Ministry of justice of the Russian Federation in response to the request. 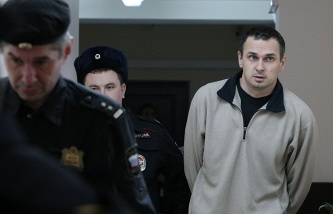 Sentsov and Kolchenko transferred to Chelyabinsk

The Ministry also noted that Russia and Ukraine are considered reference of the 13 Russians, Ukrainian courts convicted to deprivation of liberty for serving punishment in Russia.

The Ministry explained that the transfer of convicts between Russia and Ukraine are governed by the Convention on the transfer of sentenced persons of 1983 and the Criminal procedure code of the Russian Federation.

“On the basis of the received complaints the Ministry of justice seeks, corrections necessary to the Ukrainian party the document in respect of those convicted under called Convention – explained in the Ministry of justice. – Upon receipt the documents will be checked for compliance with the provisions of the Convention, including the presence or absence of grounds for preventing the transfer of the convicted”. Then the documents will be forwarded to the Ukrainian side for consideration on the merits.

“When you receive from the Ministry of justice of Ukraine necessary documents, including judicial decision on the recognition and enforcement in Ukraine of the verdict of the Russian court, the Russian Ministry of justice would be directed FSIN to make representations to the court in the manner prescribed by the criminal procedure code”, – reported in Department.

And the final decision on the transfer of the convicted person according to the Russian law accepted in court.

Another citizen of Ukraine, a 73-year-old former General Director of the state enterprise “Production Association “Banner” (Poltava) Yuri Soloshenko recognized in Russia guilty of espionage. On October 14 of last year the Moscow city court sentenced him to 6 years of imprisonment with punishment serving in a colony of strict regime.