At the start in Geneva on 14 March negotiations between representatives of the government and the Syrian opposition by the moderator from the Russian side Vitaly Naumkin. 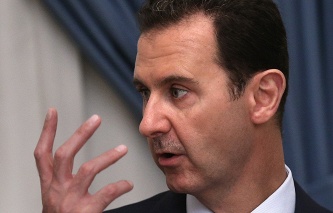 Media: Obama banned Kerry to put forward proposals on the use of force against Syria

Lavrov and Kerry discussed the situation in Syria, Ukraine, Yemen and Lebanon

“As we know and received confirmation from the UN that is scheduled on 14 March in Geneva under the auspices of the UN, with the direct participation (special envoy of the Secretary General of the organization), Staffan de Mistura, is to hold another round of indirect talks between Damascus and various representatives of the opposition,” the diplomat said.

“These contacts will be pursued with the mediation of the moderators. On the Russian side they will perform our very well-known orientalist, Vitaly Naumkin,” said the diplomat.

Preconditions for resuming inter-Syrian negotiations on the part of the opposition is the desire to break the cease-fire, said Zakharova.

“It is significant that this background information (about the humanitarian situation in Daraya – approx.) most actively trying to use “members of the Riyadh group” of the opposition in their tactics of placing preconditions for an inter-Syrian negotiations in Geneva,” – said the diplomat.

She recalled that the other day “they again threatened that he will not engage in dialogue with the Syrian government until such time as Daraya remains in the blockade.”

“This uncompromising maximalism similar to the infinite putting the new conditions, and it seems a little on self-promotion, she said. Obviously, what is behind this desire to frustrate implementation of the agreement on the ceasefire, not to permit the start in Geneva, sustainable and effective political process designed to reinforce the truce and, ultimately, provide the solution to all humanitarian problems”.

According to her, the task force on humanitarian issues in the framework of the International support group Syria (MGPS) works flawlessly.

“Continuing the constructive and successful work of the task groups within MGPS, two of them, – the diplomat noted. One of them is the humanitarian Affairs unit works without a glitch”.

Zakharova recalled that the second group ceasefire – chaired by Russia and the United States. “It consists of military contacts between our military”, – the diplomat added.