The desire of American companies to participate in the important Russian events may indicate their interest in committing acts that do not meet Russian national interests, said the Deputy from the Communist party Sergei Obukhov. 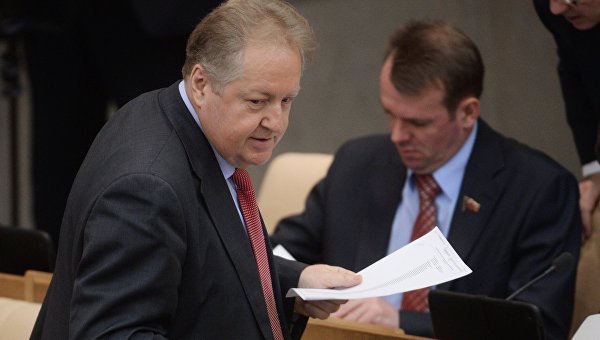 MOSCOW, 3 Mar. State Duma Deputy from the Communist party Sergei Obukhov addressed to the Prime Minister of the Russian Federation Dmitry Medvedev with a proposal to abandon the practice of bringing American companies to the public Affairs of special importance.

On Wednesday, President Barack Obama extended sanctions originally imposed in March 2014 against Russia because of events in Ukraine.

“I ask you to consider the question of waiver of attracting American companies to the public Affairs of special importance”, — stated in the request, the text of which is available.

The MP recalled that earlier representatives of the American administration told the Wall Street Journal that call the biggest US banks not to buy Russian bonds. The state Department later confirmed that convince a business to refuse doing business with Russia, reminiscent of the butts.

“In a situation where the State Department gives a direct order to the U.S. companies to cooperate with Russia under the threat of economic and reputational negative consequences, otherwise the behavior of the American organizations at a minimum should cause alarm in Russia”, — the Communist considers.

In his opinion, in the best case, such firms have a conflict of interest. “However, hardly many legal entities will agree to take those huge risks that arise in violation of the sanctions regime, for relatively modest remuneration,” — said Obukhov.

The MP believes that the desire of American companies to participate in the important Russian events and projects “may, in some cases to indicate their possible interest in committing acts that do not meet Russian national interests”.

Obukhov recalled that the U.S. government is taking a number of sanctions to companies which cooperate with Russia. In particular, decided to punish foreign banks for cooperation with companies or Russian citizens from the sanctions list. This provision was included in the law on sanctions against Russia, for violating the rules of the banks may be prohibited from opening correspondent accounts in the U.S., he writes.

Obukhov also refers to foreign media reports, according to the publications which, when the Pentagon became aware of the fact that Russian specialists helped write computer programs for U.S. military communication systems, attracting their American company were fined $12.75 million.

“Such vigilance is definitely worthwhile to exercise the and Russia. Not by chance, for example, Deputy Prime Minister Dmitry Rogozin expressed dissatisfaction with the fact that the American company McKinsey has won competition on creation of the concept of development of the Northern sea route. It is important to note that shortly before the NATO Supreme allied commander in Europe, us General Philip Breedlove said that the U.S. is studying the possibility of containment of Russia in the Arctic”, — the Deputy notes.

He also recalled that Russia’s interests in court in the Yukos case was presented by an American company. As a result the arbitration court has awarded the former shareholders of the oil company $50 billion.

The chronology of the imposition of sanctions and Russia’s response >>