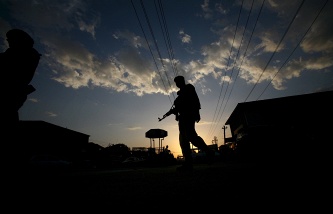 Media: the Houthis and Saudi Arabia began secret negotiations on the border

“ISIS is actively settles in Libya and Yemen, where this war, which nobody wants and which continually flares up, despite occasional agreements on truce and negotiations, many people forget or do not pay attention that it is used by terrorists, including ISIS, which, until the coalition led by Saudi Arabia is at war with the Houthis and supporters of former Yemeni President Ali Abdullah Saleh, “picks” the fruits of this confrontation,” said Lavrov.

As a result, pointed out the Minister, the terrorists are embracing those parts of Yemen that are not currently receive enough attention neither from the government nor from the opposition.

The Minister also noted that an alarming situation with the infiltration of militants is emerging in Afghanistan. “In Afghanistan, ISIS is also taking root, including in the North, displacing the Taliban or trying to negotiate with one of them, he added. – This is a very dangerous trend.”