VIENNA, March 14. /Corr. Mikhail Shcherbakov/. The head of the Federal service for drug control (FSKN) Russia Viktor Ivanov proposes to equate the problem of illegal trafficking of psychotropic substances, terrorism and nuclear proliferation. He stated this on Monday, speaking at session of the Commission on narcotic drugs the UN office on drugs and crime. 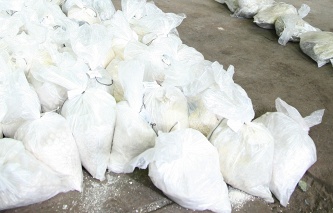 FSKN: terrorists of the IG annually receive hundreds of millions of dollars from drug trafficking

“We need to fix in all relevant UN documents that a large-scale drug production, generating a transnational drug, is a threat to international peace and security, and thereby significantly complement the existing system of drug control measures at the disposal of the UN Security Council,” he said. In his opinion, efforts should be focused on “planetary centers” production of illicit substances – heroin in Afghanistan and cocaine in South America. Ivanov noted that the share of these two regions account for about half of “all criminal proceeds in the world.”

He also encourages to apply against the organizers of these two centers the same measures against the leaders of terrorist groups. “Every year from Afghan opiates and South American cocaine kills more than 100 thousand people, therefore people who organized this process and cashing in on it, must be stopped by any measures,” – said Ivanov.

In addition, the head of Federal drug control service of the Russian Federation drew attention to the fact that the drug business is often a financial sponsor of terrorism, allocating up to 10% of their income on “the formation of controlled terrorist organizations in order to legitimate pressure on national governments and the physical destruction of competitors by drug trafficking”. “Drugs are an inexhaustible source for the functioning of transnational organized crime, which is a customer of the terrorist attacks, piracy, trafficking in arms and human beings, forms a parallel government and illegal economy, contributes to the weakening and disintegration of sovereign States”, he concluded.

The head of the Federal service for drug control Russia also considers it unacceptable weakening of the international control of narcotic drugs. In his opinion, such a move “will lead to tragic and disastrous consequences”.

According to him, “today the lifting of the ban on trade of any drug will inevitably lead to explosive growth in its consumption and production.” Ivanov believes that the main disadvantage of the strategy of the international community in the fight against drugs is the understanding of the problems as predominantly issues of crime and health of individuals”. “In this case, the brackets shall be made of the main aspect – the destructive influence of drugs at the national, regional and global security”, – says the head of the Russian Federal drug control service.

The Federal drug control service: last year drug police seized over half a ton of heroin

Head FSKN: the UN should consider drugs as a threat to peace and security

FSKN: over 3 million people worldwide have died from Afghan drugs

FDCS: about $20 billion from the sale of drugs is annually laundered in banks

FSKN: the income of criminal groups from the sale of drugs for 16 years amounted to $4 trillion

Because of this approach, he said, countries are isolated measures, while they were “confronting transnational drug crime, is able to quickly move from the accumulation of financial resources from the drug trade to advance political goals and becoming the subject of alternative political and geopolitical control.”

As a negative example of uncontrolled production and consumption of narcotics, Ivanov said the situation in China in the late 19th, early 20th century, when the absence of a ban on opium had led to “explosive growth in drug addiction”. In his words, then the number of consumers of that drug has reached 25 million people, which accounted for 5% of the population.