MOSCOW, March 14. The Deputy of the state Duma from the CPRF Valery Rashkin sees no need to discuss his behavior at the ethics Commission in connection with the publication on the website of the Moscow city Committee of the party publishing the image of a woman in black robe. About the MP told journalists. 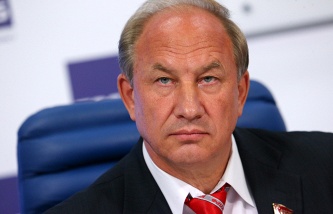 The representatives of religious confessions March 9, addressed to the speaker of the state Duma Sergei Naryshkin about the actions of the head of the Moscow city Committee of the Communist party, MP Valery Rashkina. The reason for this was the publication of the Moscow city Committee of the Communist party on a special website, devoted to the problems of migration, images of women in black robes, with a certain subject, similar to the head in his hand. This publication caused a public outcry, some politicians announced his intention to turn it over to law enforcement bodies, after which the controversial picture was removed from the site.

“I see no need to consider (the question) for a fee. We have sites million in Russia. (Discuss) a pattern – no matter what, on any site – it is not the State Duma,” – said Rashkin, adding that “even if there is a violation of the law, there are appropriate agencies that monitor it.”

“I think there’s a purely political question, which someone brought to the Council of the Duma. And I know who it is “United Russia”. Election year begins, – the Deputy noted. – I in Moscow one and a half thousand sites, have a look at them.”