MOSCOW, March 15. Faction “Fair Russia” introduced to the state Duma a bill on hourly wages. This was stated by the leader of fraction Sergey Mironov. 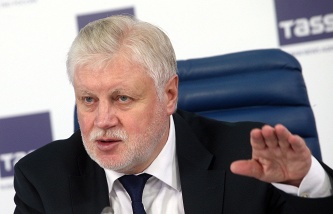 “Our faction has submitted a bill on the introduction in Russia of hourly wage in the state Duma and directed on a conclusion of the government”, – said Mironov reporters.

In his words, “the minimum wage is today cheating all those who work, and care of existing problems”. Mironov stressed that the countries “the twenty” Russia is the only one who did not enter hourly wages.

Spravorossy suggest to set the pay for one hour of unskilled labor in Russia in the amount of 100 rubles.

“The government should introduce a multiplying factor of three. The first coefficient – territorial – there is a fundamental difference between the work of man beyond the Arctic circle and works in the Krasnodar region. The second factor is the industry”, – said the leader of just Russia.

According to him, if a person works in the “hot shop” or in the mine, in hazardous work, or working as a sales Manager – the difference is obvious. “And finally, the third factor depending on the qualification of employees. One thing, Turner or fitter sixth level, and another thing – school graduate who does not know anything,” said Mironov.

Spravorossy think that setting an hourly wage will restore a fair remuneration for people’s work in Russia.