MOSCOW, March 15. The EU is trying by all means to diminish energy cooperation with Russia is irrational. 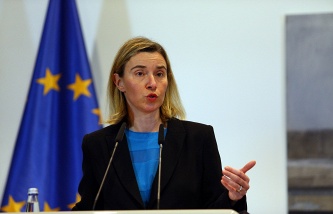 The EU has adopted five principles of building relations with Russia

This was stated by the Russian foreign Ministry in connection with the statements of the EU high representative for foreign Affairs and security policy Federica Mogherini.

“The confusion caused by linking the need to strengthen “stability” of the EU in the energy sphere Russia-EU cooperation, said in depodesta. – Energy security of the States energy consumers entirely depends on the ability to build a partnership, reliable and sustainable relationships with their suppliers. Russia is a key energy supplier to the EU and, in fact, the main guarantor of its energy security”.

“The last irrational that the EU is trying by all means to diminish energy cooperation with Russia, as well as administrative measures to limit the share of Russian commodities to the EU market, including through different kinds of legislative acts and policies, shows that EU in favor of non-regional players “sawing the branch on which sits”, destroying well-established and well-reputed for decades of Russian-EU relations”, – stressed in the Ministry.