KUALA LUMPUR, March 15. /Spec. interviewer Sergey Izotov/. Russia will continue to insist on an objective, independent and unbiased report on the causes of the crash Malaysian Boeing. This was stated to journalists by the Chairman of the Federation Council Valentina Matviyenko on the results of the meeting with the President of the Senate of the Malaysian Parliament Abu Zahar Uganga.

The crash Boeing in the Donetsk region 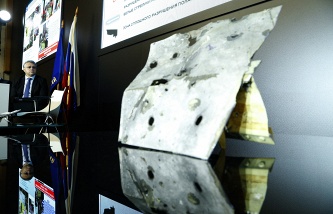 Churkin: draft UN security Council resolution on the establishment of the Tribunal by the collapse of Boeing unpromising

“Naturally, we will continue to insist on an objective, independent, unbiased, professional final report on the causes of the crash Malaysian Boeing, said the Senator.

Matvienko recalled that from the outset, Russia has consistently advocated an independent objective investigation into the causes of the disaster. She believes that all who are guilty in this tragedy must be severely punished in accordance with international regulations.

Matviyenko noted that Russia does not agree with presented a preliminary report of the Commission of the Security Council of the Netherlands on the causes of the disaster. “We do not agree, which was announced officially, with the preliminary findings of this Commission,” she said. “We believe that insufficient evidence is presented on the basis of the investigation,” – said the Federation Council speaker.

Matviyenko added that Russia submitted its observations on and objections to the report. “We hope that they will be carefully, objectively and unbiased considered,” said the Senator. She also emphasized balanced, calm and serious reaction from the Malaysian side during the investigation.

The head of the Upper house of the Malaysian Parliament, said that his country is working to ensure that all the perpetrators of this atrocity, regardless of who is going to be held accountable for this crime. “Malaysia calls upon the international community to establish a group of professional experts, which is impartial, independent, professional basis to finish it’s investigation for has been found the whole truth,” concluded Ujang.

The Federation Council speaker stressed the inadmissibility of any attempts of politicizing the investigation. “I consider it unacceptable attempt to politicize the investigation of the crash Boeing, attempts to earn political dividends in the hardest of human disaster, especially to appeal to any international Tribunal, some political trials,” – she said. According to Matvienko, professional, clear, open answer about the reasons of the crash Malaysian Boeing.