The world’s largest service to order a taxi via the Uber mobile app signed a cooperation agreement with the Department of transport of Moscow. This was told by the representative office. The press service Uber has confirmed this information.

Moscow Department of transport demanded Uber to sign a document in which the company will take on two commitments: first, to work only with legitimate taxi drivers who have permission to taxi operation, secondly, to transmit data on the movement of cars around the city, explained in early February edition Gazeta.ru the head of Department Maxim Liksutov. “If not, then we have a legitimate right and duty to contact the police and start the procedure associated with the prohibition of the activities of [service]”, — noted the official.

The agreement Uber will give 90 days on a “phased transition” to a new work order (only with legitimate drivers), said in a joint statement, Uber and diptrans. In addition, under the agreement, Uber will have to pass in the Center of traffic organization of Moscow government data movement is connected to the cars system, which, in the opinion of the diptrans, will help to improve the urban Intelligent transportation system.

“We welcome Uber’s decision about involvement in Moscow drivers have official permission to taxi operations. This agreement is very important for all Muscovites and guests of the capital, it will improve the safety of transportation. Only when traveling on official taxi people get guarantee reliable and quality service”, — commented on the agreement, Deputy mayor of Moscow in the Moscow government, head of the Department of transportation and development of road transport infrastructure of Moscow Maxim Liksutov.

How many in Moscow legal taxi drivers

By calculations of Department of transport and development of road transport infrastructure, the optimum number of taxis in Moscow — 50-55 thousand cars. To date, the city has issued approximately 60 thousand permits, but to limit the issuance of licenses is not planned. There are dishonest taxi drivers who have permission, and the next day cancel it to avoid paying taxes. Such, according to the Department of transport, about 8 thousand drivers.

According to the plans of the Moscow government, the agreement with Uber was to be signed before the end of 2015, but representatives of the Internet aggregator deferred first until the end of January, and then for another 10 days. A representative of Uber Evgenia Shipova explained that the negotiations were delayed due to complicated procedures for internal approval of such documents in the company — they must be approved by management in San Francisco. In early February, Liksutov said that Uber is to sign the agreement a month.

A source close to one of the parties and familiar with the negotiations, argues that the details of the agreement were discussed in the company and the Moscow government at the highest level: in 2015 with the mayor of Moscow Sergey Sobyanin met who came to Russia top managers of the company, including Fraser Robinson, Director of business development in Europe. According to the source , the cause of the protracted negotiations were the requirements of the most Uber: the company demanded from the government the fulfillment of certain conditions, for example to provide access to the database of the Ministry of internal Affairs to check drivers for criminal records. “But it is a competence of the Ministry of internal Affairs, the Department of transportation this could not contribute. Uber is only 8-10% of the Moscow market, while the two larger players we already agreed on everything,” said the source .

Work with illegal Uber drivers — a problem that causes complaints of regulators around the world. Judicial decisions in Italy, Holland, Belgium, Spain, France and Germany have banned UberPop service, which works exclusively with private drivers and licensed taxi drivers.

In Russia the license for passenger taxi transportation is free, and its appearance in the capital, for example, not exceed 10 working days and can be carried out remotely via the portal. But in Moscow, Uber may have another problem — a mandatory body color of the car, which, according to the amendments to the Moscow law “On automobile taxi”, applicable from 1 July 2013, should be yellow. From July 2018, all Moscow taxis must be plastered with yellow tape. This is contrary to the concept of Uber, which bills its service as “a private car with a driver for each”, and can become an obstacle in company development in the Russian market, said a source close to the company management.

However, while Uber and other services, for which a fundamental “natural” color of vehicle, can benefit from the agreement between Moscow and the Moscow region, which allows taxi drivers with licenses obtained in the field, to carry out passenger transportation in Moscow. In the field the requirement for the yellow vehicle has the no effect.

So, in February 2016 in the suburbs 3878 issued license for taxi transportation, 3.3 times more than in February 2014, follows from the data of the regional Ministry of transport. In total, since the beginning of the year issued 6.6 thousand permits, but for the whole of 2015 – more than 30 thousand, and spike was in December, when the number of new licenses has exceeded 5 thousand 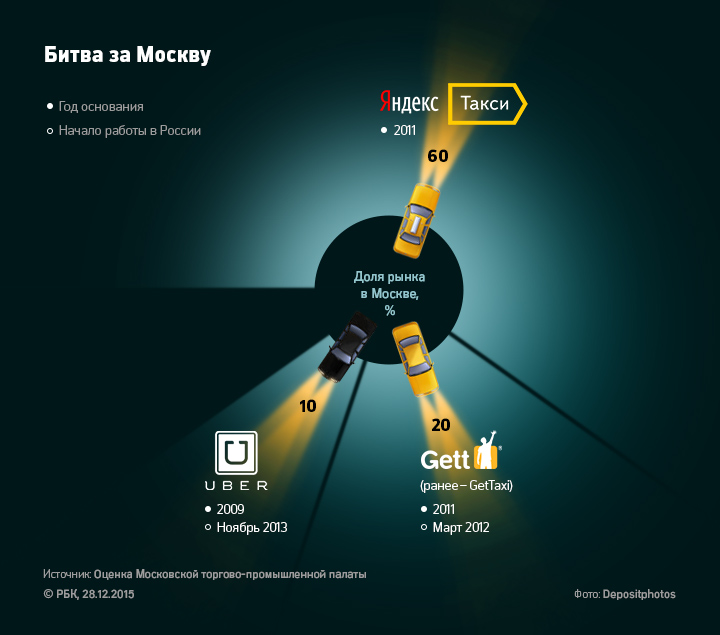 The competition from Uber (popular in the Moscow market of services of taxi aggregators) “Yandex.Taxi” and Gett (LLC “Gettax Rus”) — similar disagreements with the city authorities was not. “Yandex” has signed the agreement in the fall of 2014, it’s not just the work of the taxi service, but sharing and open data in transport, explained the representative of “Yandex.Taxi” Elina Stavisky. Gett has signed an agreement with the Department of transport in January 2016, told the company representative Alena Balakireva. Representatives of both services assert that their companies have begun to work exclusively with licensed taxi drivers “before signing the document”.

Uber is not only the largest service aggregator taxi, but also the most expensive startup in the world. In December 2015, investors valued the company at $62,5 billion Among investors, Uber is in Russian: the owner of the Summa group Ziyavudin Magomedov, the company is USM Holdings Alisher Usmanov and Mikhail Fridman, which, through its partners and investment Fund LetterOne has invested in the service $200 million To date, Uber operates in 400 cities around the world in 68 countries. In Russia the service is available in eight cities (in February, he started in Krasnodar), but the Vice President of Uber, Ryan graves in an interview, said that by the end of 2016 Uber will be present in 17 Russian cities.