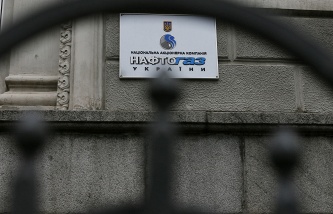 “Gazprom” has increased the requirements of “Naftogaz” for unselected volumes to $31.8 billion

“Before the end of the arbitration process in Stockholm routes will increase her claims. Gazprom will charge us an additional amount for the gas they wanted to sell us and we bought it. We are going to count the extra amount as compensation for our overpayment (compared to the fair price) for the delivered gas (e.g., in 2015) and its shortfall for giving us transit services”, – he wrote on his page on the social network Facebook.

According to Vitrenko, in the first quarter of 2016 “Naftogaz Ukraine” will consist of “Gazprom” about $1 billion as the shortfall for transit services. “On an annual basis for the year 2016, this amount would have been approximately $4 billion,” he said.

While Vitrenko said that the increase in claim requirements of the Russian gas holding unfounded. “Almost the entire amount of the claim “Gazprom” is the accrual on the principle of “take or pay”. We believe these claims are completely unfounded and not recognize a single penny. We will indicate that this principle could not be applied for a number of reasons: overpriced, and completely inadequate amount, of illegal restrictions on the destination of delivery and so on,” he said.

Requirements of the Ukrainian side, the representative of “Naftogaz Ukraine” has called “completely unfounded” and said that the company will demand their full implementation, including requirements for payment of compensation.

Earlier today PJSC “Gazprom” has sent to the Stockholm international arbitration clarified the requirements of the NJSC “Naftogaz of Ukraine”. After you add a payment for the remaining volume in the third quarter of 2015, the total sum of requirements has grown to 31,759 billion, the report said the Russian gas holding.

On 16 June 2014 Gazprom appealed to the arbitration Institute of the Stockholm chamber of Commerce a request for arbitration with the aim of collecting with “Naftogaz of Ukraine” debt for unpaid natural gas and interest on specified indebtedness.

On the same day, “Naftogaz of Ukraine” has addressed in arbitration with the requirement to retroactively change the price of natural gas, the recovery of all overpayments made since may 20, 2011 in the amount of at least $6 billion, and cancellation provisions of the contract, prohibiting the sale supply on it’s natural gas outside of Ukraine.

21 July 2014 the above cases were consolidated. In October 2014, Naftogaz filed a second suit, demanding to oblige “Gazprom” to compensate for the decline in transit in the amount of $3.2 billion and another $3 billion for low transit rate.