The bill that revised the procedure for withdrawal of land, was submitted to the Duma on 29 February a group of deputies-United Russia party members led by speaker of the Duma Sergei Naryshkin. The document has a high chance of adoption, say the interlocutors close to the leadership of the faction and the state Duma.

The draft was prepared after the message of President Vladimir Putin, who in December 2015 instructed to put into circulation of unused agricultural land, it is told in the explanatory note to the bill. According to the authors of the document, now not used or are misused by approximately 20-25 million ha of 385.5 million hectares classified as agricultural land. Relevant Committee: civil law — waiting for feedback on the document until April 2.

Deputies propose to reduce from five to two years the period after which the land can be seized from the owner who uses it for other purposes or uses. The obligation to apply to the court for seizure of land will fall to the regional authorities, they will be required to arrange public auction, to realize the withdrawn land “to those who are willing and able to cultivate the land,” said Putin in the December address to the Parliament.

If the first public auction will be held, the regional authorities will have to be repeated, reducing the initial price by 20% to the bill. In this case, the starting price refers to the cadastral value. If the land fails to sell at low price, with an additional discount of 50% (i.e. 60% below the original price) offer to buy the municipality. In the absence of such a municipality desires the duty to redeem it with the same discount will fall to the regional authorities, to the bill. 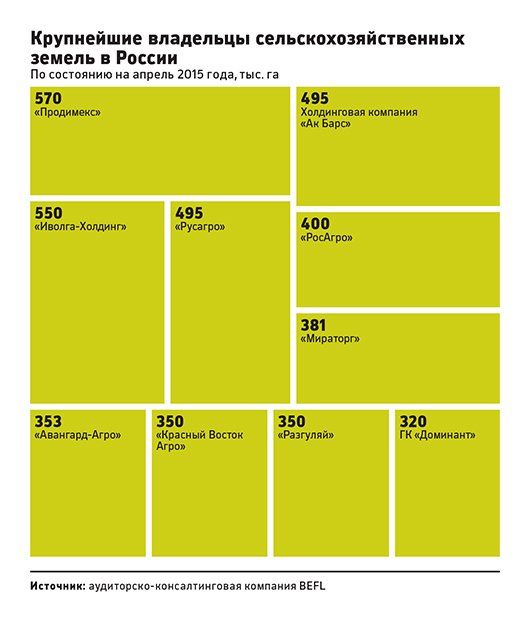 “At a reasonable price”

Average cadastral value continues to be “detached” from reality, says the report of the analytical company BEFL, conducted in November 2015. For example, in the Oryol region “fair”, according to the calculations BEFL, the price of agricultural land is less than 40 thousand rubles per hectare, and cadastral starts from 90 thousand rubles Comparability and correlation between cadastral value and the fair value of land in the regions is missing, it is noted in the report; the situation is different only in a few regions, such as Bryansk, Kursk and Lipetsk regions.

Due to the economic crisis, the regions, and so lose the income, and in the case of the adoption of this rule, the load will only increase, fears the Governor of Kaluga region Anatoly Artamonov: “Now the budgets are generated with difficulties, and still need to look for money to buy land”. The draft bill he calls “moving forward” to solve the problem of unused agricultural land, but believes that the need to avoid the regions required to buy the land.

Alternatively Artamonov proposes the following scheme: to establish criteria for the efficient use of land and to owners who use it inefficiently, to introduce increased ten times the land tax. “It would be an incentive measure [for owners] to contact the local authorities with a proposal to buy the plots “at a reasonable price,” says Artamonov. — Most often we would not have bought this land. We investors are in the queue that would be willing to buy [these sites]”.

To whom belongs the group of “rosagro”

As previously reported by “Vedomosti” with reference to regional officials, former Federal officials, two former consultants and contractor “rosagro”, the latter owned by a group of “Bean” family Gutseriev — Mikhail shishhanov. On the website “rosagro” States that it manages more than 400 thousand hectares of land in Saratov, Penza, Voronezh, Orel regions and the Stavropol region. Key in the Penza region, the company has in the management of 268 thousand hectares of land.

On Monday, it was reported, in which the Bank has denied the information about the presence of BIN group in the share capital “rosagro”. “Neither the BIN nor the shareholders of the group, none of the companies belonging to the BIN group (including the Bank), are not beneficiaries of the company “rosagro”, — stated in the message.

The bill is intended to assist the authorities of regions — regardless of the economic profile of the region — to improve things with the budget, says the head of Kalmykia Alexei Orlov: the land falls within regional or municipal land Fund and then sold through the auction or under transparent conditions for rent, that additional funds in the budget. “The main goal is that this land is effectively earned on the assignment, he says. — Echoes of a ten-year histories, when for a pittance bought up huge tracts of land and the part not used”.

That the earth will not be realized, Orlov considers “dubious”: “including in our country farmers are asking for more land, and we have not had such opportunities.”

The regional authorities will cope with the cost of the land, says the Chairman of the Duma Committee on agrarian issues, co-author of the initiative Nikolay Pankov: we are talking about lands that are in worse condition than others, their value will be small. According to the MP, the number of regions requested to include in the bill a provision for the redemption of the land, to be able to transfer land to investors who come and ask for the plots to work. Money from the sale of unused land will get owners who have their retirements, emphasizes the punks: “We believe that this land is not neutral, it has the owner — you can’t just take it away and redistribute”. 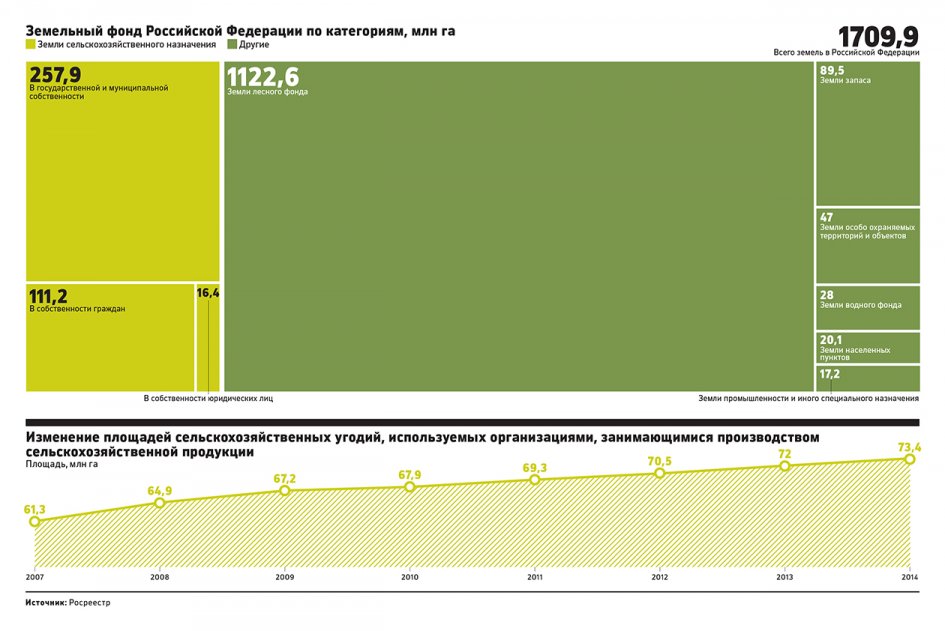 As of 1 January 2015 in Russia there were 385,5 million hectares of agricultural land is 22.5% of all land in the country. According to one of the initiators of the project, the Deputy Airat Khairullina, after the tightening of legislation may be released 12-18 million hectares.

The new amendments will be favorable to state and municipal officials, as accelerate the procedure for seizure of land, according to the partner of legal company Art de Lex law firm Evgeny Arbuzov.

“This is one of the mechanisms of coercion, because the land is not idle, admits Vice-President of one of the largest Russian agroholdings “Miratorg” Alexander Nikitin. But for the category that processes of the earth, the new rules won’t change it. Except that there will be more available land”.

The CEO of the Institute for agricultural market studies Dmitry Rylko doubt that the new amendments will change the situation much. According to him, would be much more effective than economic regulation, when the holder of land would be disadvantageous to not use it.

The Ministry of agriculture is promoting the initiative on withdrawal of unused farmland since 2010. The bill also has a provision requiring the regions to buy the land, which would be impossible to sell at a public auction. This provision was previously criticized by experts: in particular, Professor, chief researcher of the Center for agrofood policy, Ranepa under the President of the Russian Federation Vasily Uzun in comments on the draft law in the newspaper “Krestyanskie Vedomosti” wrote that the Federal centre has no right to oblige the regional authorities to buy undeveloped land. Additionally, this procedure of seizure of land do not enter it into circulation, but only a lot of the people who received the land for nothing — a provision of the bill assumes that the money from its sale at auction or foreclosure by the authorities will receive the former owners seized the land, pointed out the expert.