MOSCOW, March 15. The Ministry of industry and trade of the Russian Federation proposed to the retailers clothing Zara (Spain) and H&M (Sweden) and the Swedish seller of the goods for house IKEA to place their orders in the sphere of light industry in Russian enterprises. 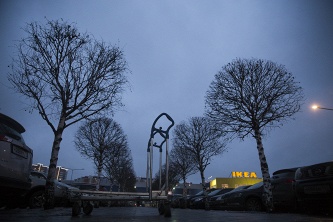 IKEA purchased the land in Krasnoyarsk for a shopping center

This was announced by the Deputy Minister and industry of the Russian Federation Victor Evtukhov, speaking at the conference Fashion Futurum.

“We are holding meetings with the major network players such as IKEA, Zara, H&M. They sell the products under its own brand, but we would be interested to order the production of some types of products (in the field of light industry – approx. ed.) were placed in Russian enterprises”, – said the Deputy head of the Ministry of industry and trade.

Zara, part of Spanish group Inditex, ready to start working on this collaboration, said the adviser of Department of development of inner trade, light industry and consumer market of the Ministry of industry and trade Svetlana Romanova.

“We have agreed that you will prepare a presentation of opportunities of the Russian light industry on the categories of goods for which we can work, we can satisfy them in quality and price and terms. The first step is done, they are ready to begin to consider our proposal,” said Romanov.

Good signal, she said, is that such meetings be initiated not only by manufacturers but by retailers. “For example, decathlon (Decathlon, France), they are interested to start cooperation, consider a database of Russian suppliers”, – said Romanov.

However, many Russian retailers such as Sela, which produce garments in China, are interested in working with the Russian manufacturer, she said.