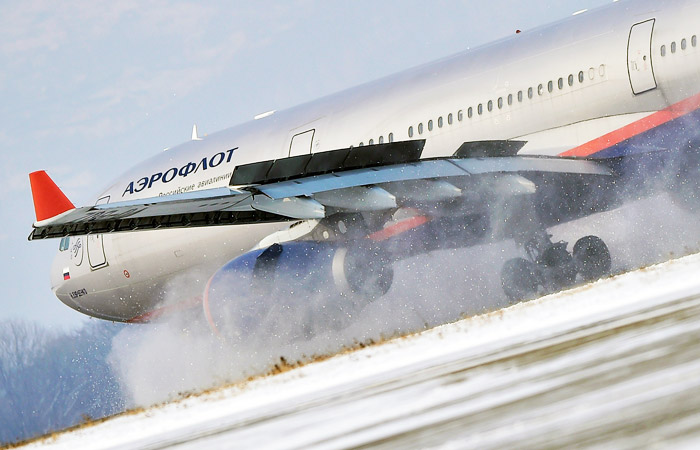 Moscow. March 11. Last year’s history with a stop Transaero, when only operational use of resources of “Aeroflot” has prevented a social explosion due to the termination of flights of the second largest carrier, underscores the risks of loss of state control in the company, considers the head of Ministry of transport Maxim Sokolov.

The state Aeroflot 51.17% of shares in 2014 was published a presidential decree authorizing the erosion of the state share to 50% + 1 share. At the same time, the Agency planned deal, under which at the same time placing a small additional issue, the government stake to lose control, was expected to sell quasiclassically (belonging to the “daughter” of “Aeroflot”) package and perhaps a package of the state Corporation “rosteh” – just 8-9% interest on $200-300 million “Aeroflot” even made the selection of legal advisors and investment banks to support the “road map” of privatization (respectively Debevoise & Plimpton and Sberbank CIB JP Morgan), but so far these plans have not materialized.

In early February a meeting on privatization, to enhance which against the background of falling oil revenues, the budget calls for financial-economic bloc of the government, chaired by Vladimir Putin. The head of “Aeroflot” was one of the participants.

As reported by Sokolov, now there is no final decision about the beginning of privatization, so talking about it is premature.

“It is necessary carefully to weigh all risks, including those related to resource use Aeroflot as the only major airline with state participation, national carrier. Last year’s events, including the situation with the bankruptcy of our second largest airline, Transaero, has shown that the government of such a resource allows you to instantly solve a huge social problem, associated with the need to Finance the transportation of passengers or the payment of the cost of tickets on the cancelled routes”, – said the Minister.

Aeroflot mobilized funds, which, of course, was not in the budget of the Russian Federation, approved a year ago, is about 17 billion rubles. And seek from a backup source such a sum would have been almost impossible in the short term. Due to the fact that “Aeroflot” has received the appropriate directives of the government, the Board of Directors voted for the decision. This allowed – for the first time in the history of Russian aviation and rare case in the world – in a short time and in a non-conflict mode to carry all the passengers without causing a social explosion”, – said Sokolov.

Having lost control, the state will not be able if necessary to carry out a similar decision, stated the head of the Ministry of transport. “Aviation is global, and not only Russian, – is in a difficult situation, the profit margins very marginal. The more we see a strong decline in international traffic, although domestic market and growing. In this situation, to abandon such a resource that allows you to make quick decisions, it is theoretically possible, but it is necessary to study the issue and to err,” said he.

Answering the question whether we are now studying the option of selling 25% of shares of “Aeroflot” (it is the block, according to sources of the newspaper Financial Times, wants to buy Arkady Rotenberg, the entrepreneur interest in the “Aeroflot” refutes), Sokolov said that the Ministry this question is not considered, but the final decision will still remain with the government.