GROZNY, March 15. Commissioner for human rights in Chechnya Nurdi Nukhazhiev addressed the Investigatory Committee of the Russian Federation with a request to prosecute the Deputy Chairman of the party Parnas Ilya Yashin a published report on the situation in Chechnya, as well as to restrict access to his page in Twitter. This was reported by the press service of the Ombudsman.

“The Commissioner for human rights in the Chechen Republic sent an appeal addressed to the Chairman of the investigatory Committee of the Russian Federation (Alexander Bastrykin – approx.) with a request to prosecute the Deputy, “Parnassus” Ilya Yashin”, – stated in the message released today. 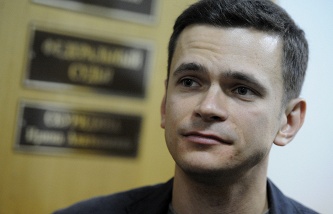 Nukhazhiyev asked to bring Yashin to criminal liability for libel and extremism. In addition, the Ombudsman States that “to address the issue of attracting Ilya Yashin criminal liability on access to the Internet (I mean the Twitter – ed.) should be limited as a matter of urgency”

“The report Ilya Yashin impregnated slander, cynical, shameless lies, false allegations to the head of Chechnya, addressed to the heads of Executive and legislative powers of the Republic. Thus, we are witnessing again and again the craziest, offensive accusations speak to the head of the Chechen Republic Ramzan Kadyrov. And this is done publicly,” the statement said Nukhazhiev.

According to the Ombudsman, still no one brought to justice, despite the false information in the report. “As a result of impunity addressed to the leaders of the Chechen Republic put forward new and new incredible charges,” stated Nukhazhiev.

According to him, “Yashin activity undermines the foundations of national security of the country, violates the constitutional rights of citizens and adversely affects the social and political situation in Russia.”

On Monday, the press Secretary of the head of Chechnya, Alvi Karimov appealed to the Prosecutor General of the Russian Federation with a request to prosecute the Deputy Chairman of the party Parnas Ilya Yashin in connection with the publication of the report on the situation in the Republic. Earlier, on 23 February, Kadyrov himself has published a report Yashin in social networks, calling it the content chatter.