KRASNODAR, March 16. A flight of su-25 returned from Syria, landed on one of the bases of the Krasnodar region, the correspondent. 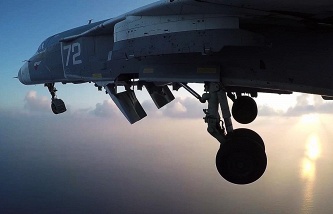 To meet the pilots at the airport came their wives, children, relatives and friends. Welcoming greeters, the aircraft passed over the airfield in front of air formation at low altitude, then made the dissolution.

The aircraft flew with the Syrian air force base Hmamin to Russia on Wednesday morning. Yesterday in the Russian Federation has returned fighter-bombers su-34. In addition, on Tuesday afternoon it became known that from Syria flew bombers su-24M.

March 15 the bulk of the Russian aviation group is leaving Syria. On Monday, President Vladimir Putin said that the tasks set before the military, “generally made”. On Tuesday, Deputy defense Minister, state Secretary Nikolay Pankov said that the strikes against the terrorists would continue.

The pilots presented the awards

The Russian su-25 during operation in Syria has made more than 1,6 thousand sorties and dropped about 6 thousand bombs, said the commander of the southern military district Alexander Galkin on the ceremony level of these aircraft.

“Today, after a long trip we meet our best pilots. They performed all assigned tasks for six months in complicated trips made 1.6 thousand sorties over thousands of hours in the Syrian sky – dropped on the heads of terrorists about 6 thousand bombs,” – said Galkin.

The commander of the southern military district thanked the pilots who had returned from Syria, and presented them with awards – medal “Participant of military operations in Syria.”