The information that on March 7 superior court of Stamford (Connecticut) issued a warrant for the arrest of Shalva Chigirinsky, was confirmed by a representative of the police Department, Greenwich (Conn) Lieutenant Craig gray. In answer to a query he informed that a bench warrant for the arrest of Chigirinsky was issued following the investigation of an alleged “inappropriate contact” Chigirinsky and “women under the age of 16 years”.

According to the Department of police of Greenwich, March 10, Chigirinsky turned himself in to police and was released on bail of $50 thousand, on March 17, was to be held the next trial. Its details were not disclosed.

In a press release police Department Greenwich () specifies that Chigirinsky is also suspected in alleged bodily injury of a minor. 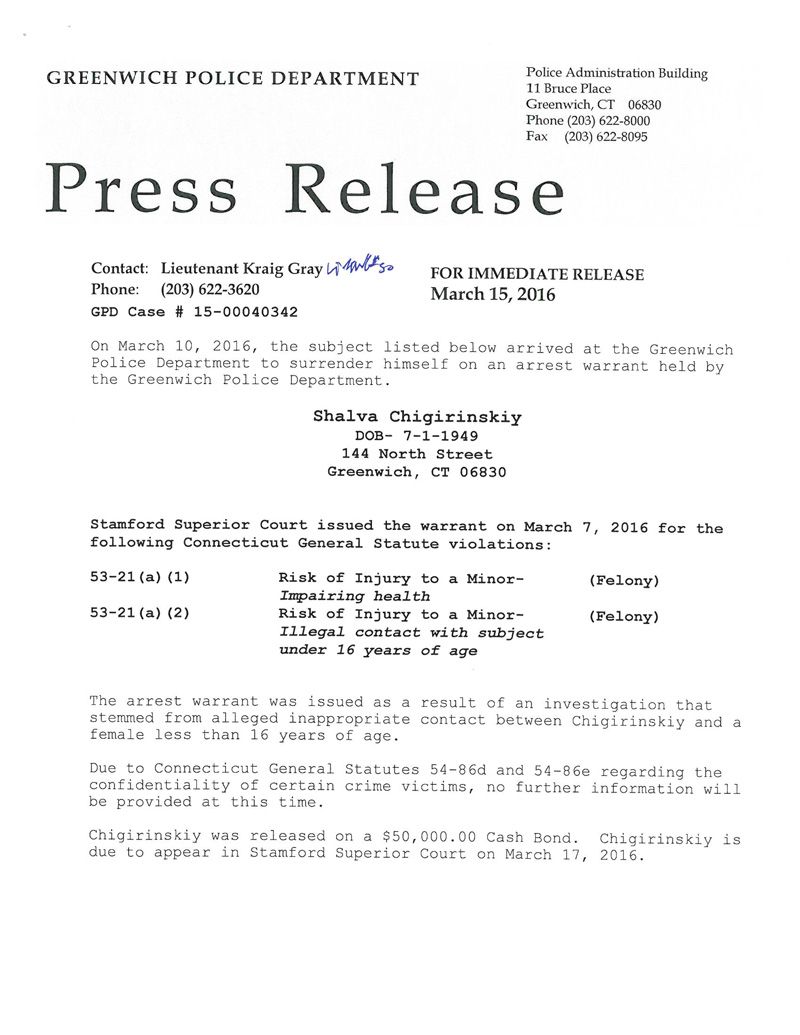 The next hearing in the case of Chigirinsky, according to the city edition of the Greenwich Time Greenwich, will be held on March 29 (on the website of the judiciary of Connecticut this information is not presented). Lawyer Audrey Felsen law firm Koffsky & Felsen, which, according to Greenwich Time, represents the interests of Chigirinsky, said that her client is innocent. “Mr. Chigirinsky categorically refutes all the allegations against him,” said she. To contact representatives of Chigirinsky on Saturday failed. Representatives of Koffsky & Felsen on the inquiry have not yet responded.

In November 2012 the former wife Tatyana Chigirin Panchenkov, with whom he lived in wedlock between 2003 and 2009, filed against the businessman sued in the courts of Connecticut, where he claimed that for 10 years had been “brutal and barbaric physical, psychological and emotional violence”. Panchenkov Chigirinskiy accused of assault, emotional pressure and deprivation of freedom. However in October 2014 the jury of the city of Waterbury were recognized Chigirinsky not guilty on all the indictments (this was reported on the website of the law firm of Ryan Ryan Deluca, who represented the interests of Russian businessman).

In June 2014 Chigirinsky himself appealed to the Supreme court of new York (later the suit was transferred to Federal court in new York city) the charges against the former spouse. The businessman claimed that before the divorce has transferred the Tatiyana panchenkova collection of values, which he estimated at $120 million, the Collection included a diamond ring worth $3.6 million, Oriental rugs, chandeliers, vases and furniture. As asserted Chigirinsky, the collection was transferred from the Tatiyana panchenkova in trust for their children, but Panchenkov sold out of the items collection. Chigirinsky has accused ex-wife in illicit enrichment and unlawful possession of property and its sale. The investigation of this case is not over yet.

He is suspected of illicit relations with a minor and damage to her health – according to a press release from the police Department Greenwich CT.

The main assets Chigirinskiy in Russia were 23.5% in the oil company Sibir Energy (later became “Gazprom oil”) and the company Russian Land, which was owned by 16 major development projects (including the tower “Russia” in the complex “Moscow city”, reconstruction of hotel “Russia” in Moscow Zaryadye complex “New Holland” in St. Petersburg, the project “Crystal island” in Nagatinskaya floodplain and several others). Last time Chigirinsky was in the list of the richest Russian businessmen according to Forbes in 2009, then his fortune was estimated at $600 million.

In 2009 the main investigation Department of Moscow opened a criminal case on tax evasion by the Moscow oil company (MNK) and the Moscow oil and gas company (mngc), the founder of which was Chigirinsky. The businessman decided to leave Russia and since then has not returned. In the case of tax evasion OLS and mngc were closed in 2010.