In response to statements by the head of SBU Vasily Gritsak, who has made the involvement of Russia to the bombings at the airport and the metro of Brussels, Russian Prime Minister Dmitry Medvedev said Hrytsak “jerk”. The commentary appeared in the premiere Facebook

“The chief of the security service of Ukraine Gritsak declared involvement in the attacks in Brussels, is a moron,” wrote Medvedev in comments to my post in Facebook with condolences to families of victims in Brussels. 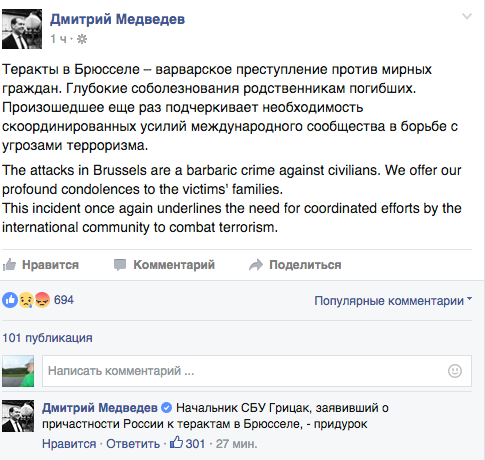 The message of the statement quoted Medvedev in his Facebook and the representative of the Russian foreign Ministry Maria Zakharova. “Not a word,” she wrote.

On the word Hrytsak about the involvement of Russia to the explosions in Brussels reacted and the head of the Investigative Committee of Russia Vladimir Markin. In his Twitter Medvedev wrote that “the most insane and stupid statements to the square no equal”.

In the nomination for the most insane and stupid statements to the square no equal. Just give me a reason… https://t.co/4jAHb0Dvak

Earlier Tuesday, Hrytsak said that he “wouldn’t be surprised” if the explosions in Brussels “are element of the hybrid war of Russia”.

“Now will blame on ISIS (a terrorist organization banned in Russia), I can not claim, but I make the assumption,” said the head of the SBU.

In Brussels this morning there were several explosions. Two sounded at the airport, and one in metro. According to unconfirmed reports, a total of the victims of the attacks resulted in 23 people.