Two years ago against Russia imposed the first economic sanctions: March 20, 2014 the U.S. has blacklisted four businessmen of the “inner circle” of President Vladimir Putin and Rossiya Bank, with assets of $10 billion During this time under the sanctions of USA, EU, Canada and other countries were more than a hundred people and even more companies and organizations, and the largest state-owned banks and oil and gas companies were insulated from Western markets of capital and imported technologies.

Technological sanctions on the economy while no effect: they were directed at reducing the potential production of stranded oil, and not against the current production, which is at record levels. In 2015 Russia has learned 534 million tons of crude oil in post-Soviet history. But financial sanctions immediately made the maximum effect: external capital markets for Russian companies for the most part closed soon after the annexation of Crimea, and the government can not return to the market of sovereign Eurobonds.

Financial sanctions have not only direct effect but also indirectly “in the form of reduced foreign direct investment, reduced opportunities for borrowing are not sanctioned companies and banks and reducing capital inflows to the market of public debt”, the article by Evsey Gurvich and Ilya Prilepsko of the Economic expert group (EEG), published in “economic Issues” in January 2016. If desanctions in 2013, Russian issuers attracted at the expense of Eurobonds $46.4 billion in 2014, only $10.4 billion, and in 2015 — just over $5 billion (PwC data).

On the other hand, financial sanctions have become a trigger for issues of Vnesheconombank, which may result in heavy load for the budget, acknowledged in early March, the former head of VEB Vladimir Dmitriev. “You see, if there were no sanctions, no one would pay attention to the VEB the VEB”, — he said. The needs of VEB, 2014, suffering losses estimated at 1.7% of GDP, its external debt is about $20 billion and to refinance debt to the West.

Now VEB is indirectly involved in the fact that the Russian government is not under sanctions, can’t attract money in the West. In early February the Ministry of Finance invited two dozen foreign banks to participate in the organization of the first 2013 issue of sovereign Eurobonds in volume to $3 billion But first, the U.S. government advised its banks to desist from the deal, allegedly because the money can be transferred from the budget pogankiny companies, and then and European officials have privately issued a similar warning, wrote in mid-March, the Financial Times, stating that “the obvious candidate to receive funds [in circumvention of the sanctions] is Vnesheconombank”. 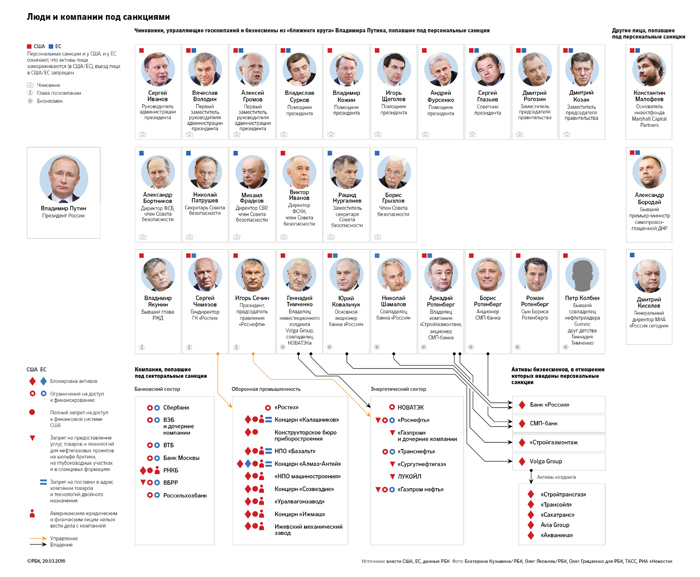 To assess the impact of sanctions on the performance of the Russian economy, Gurvich and Prilepsky from EEG to build predicted values for two scenarios (when the price of oil is $100 and $50 per barrel) first, in assumption of absence of sanctions, and then given limited access to financing. The authors note that the effect of sanctions is intensified by the drop in oil prices, as this growing number of losses of capital inflows as a share of GDP. Net capital outflows caused by the sanctions, the authors estimated at $58 billion in 2014 and $160-170 billion for the period 2014-2017. Total losses in net capital flows during this period — 8% of GDP in 2013, accumulated losses in GDP, 6 percentage points of GDP in 2013.

The increase in the outflow of capital slows down the dynamics of domestic demand, the economists write: “as a result of low oil prices in the scenario with sanctions, investment in fixed capital on average over 2014-2017 are 3.5% lower compared with the scenario without sanctions, and the turnover of retail trade 2.6% lower.”

In September 2015 Citigroup estimated the contribution of sanctions to the fall of Russia’s GDP in 10%, whereas the remaining 90% triggered by the fall in oil prices, explained then Citigroup chief economist for Russia and CIS Ivan tchakarov.

At the end of 2014, Finance Minister Anton Siluanov said that Russia loses $40 billion a year due to imposed international sanctions — 2% of GDP. And in January 2016, the Deputy Minister of economic development Alexey Likhachev estimated losses to the economy from Western sanctions and retaliatory sanctions Russia to €25 billion in 2015. The international monetary Fund in August 2015 estimated primary effect of the sanctions in 1-1,5% of Russian GDP. In the medium term, according to IMF forecasts, the accumulated losses of the economy will be 9 percent of GDP, including by slowing productivity growth.

Daniel gross and Frederick Mustill from the Centre for European policy studies (CEPS) in October 2015 pointed to the fact that the EU’s share in Russia’s imports remained stable until the end of 2014, and then declined to 37% by may of 2015, which corresponds to the export from EU to Russia less than $500 million a month. The U.S. share in Russia’s imports increased after the imposition of sanctions up to 10%. It turns out that sanctions have not led to significant changes in trade flows, conclude the experts of CEPS.

According to the chief economist of “VTB Capital” Russia and the CIS Alexander Isakov, the Bank estimates that the contribution of borrowing constraints in key economic indicators is negligible. “We all get to explain due to the fact that happened with oil,” he says.

To highlight the effect of sanctions on economic performance is problematic: the data are few, they are “short”, and the introduction of sanctions almost coincided with the fall in oil prices, says Finance Professor NES Oleg Shibanov. The impact on financial markets was small — maybe about 10%, the main influence is what has happened with oil, and the availability of financing from the Central Bank, he said.

August 7, 2014 in response to Western sanctions Russia imposed a food embargo on products from EU, US, Norway, Canada and Australia. August 6, 2015 it was extended for another year. In March 2016, Prime Minister Dmitry Medvedev said that the embargo will be maintained until then, “while keeping external pressure”. “Here illusions should not be. If something is extended, so will get in response to this extension,” said Medvedev.

“Until 2014-2015 Russian inflation was about 6%, so we started with a relatively reasonable base”, — says Oleg Shibanov. In 2014 she reached 11.4%, in 2015 — at 12.9%. Thus, any “superstructure” in p. 5-7 p. Almost all of this change can be explained by the transfer effect of movements in the nominal exchange rate to inflation, the expert explains. Estimated Shibanova, about one-third of the additional “add-ins” above the 6 percent inflation can be explained by the contracti, the rest is the impact of the exchange rate.

According to the results of 2014 Ministry of economic development of Russia estimated that the contribution contracti in annual inflation (to 11.4%) was about 1.5 percentage points (in January 2015 the effect increased up to 2-2. 1 p. p.). While food inflation in 2014 was equal to 15.4% and of 3.8 percentage points — that is almost a quarter of the total — was due to the effects of countersanctions.

“The main effect of food antisanktsy were revealed in late 2014 — early 2015 on the strengthening of food inflation and inflation in General, — said the representative of the Ministry of economic development. — Dynamics of domestic manufacture of food products significantly outpaces food imports in physical terms and in value. It speaks about what is happening in this area the processes of import substitution”. According to the Department, the contribution to inflation of counter-sanctions amounted to about 3% by March 2015 (peak of inflation at 16.9%). Deputy Minister of economic development Alexei Vedev believes that the impact of countersanctions on inflation in Russia in 2016 will come to naught.

Speaking of counter-sanctions, it is necessary to take into account the positive effect associated with agriculture and food sector, says chief economist at ING Group in Russia and CIS Dmitry Field. “But we must remember that any wins here is losing population, it’s just a redistribution of wealth from the population in these sectors. The sanctions allowed to do so with greater speed,” he says.